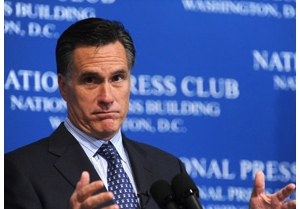 Speaking in New Hampshire on Wednesday, Mitt Romney, one of the front-runners in the race for the Republican nomination, accidentally quoted Keynes.

Trying to defend against accusations he is a ‘flip-flopper’, Romney said:

The problem is that Winston Churchill didn’t say that; John Maynard Keynes did, and the original quote is:

“When the facts change, I change my mind. What do you do, sir?”

Romney’s already made the headlines this summer, after his bold claim that “corporations are people too”:

He must get it all from his father, who in 1967 rather unfortunately spoke of being “brainwashed” into supporting the Vietnam war:

“SO GOV. GEORGE ROMNEY has started his long tour of the big-city slums with a discouraged entourage of staff aides and an unadmiring escort of newspapermen. If he is only half as maladroit in discussing the problems of the ghettos as he has been in clarifying his views on the Vietnam war it will mean the formal ending of a candidacy which has in harsh fact ended with his “brainwashing” gaffe.

“After his luckless verbal fall, nothing that Romney can do can possibly put our Humpty-Dumpty together again.”

Given how much some Tories idolise the Tea Party movement, which Romney is trying to align himself with, we may well hear Osborne trotting out the same excuse, when – if – he finally realises that we desperately need a Plan B for the economy. Who will he attribute it to?