Lord John Hutton claims his report was about “sustainablility” but the word is only used once in the report - and yet now he’s spinning for Tories. 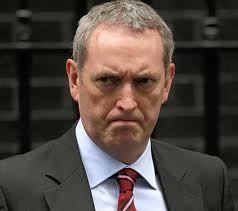 Government ministers have been on the ropes over pension reforms ever since the public sector strikes. Their claim that pensions were ‘unaffordable’ was widely discredited, even by the usually supine BBC. Memorably, The Today Programme’s Evan Davies told both Francis Maude and Justine Greening he had searched the Hutton Report and the word ‘unaffordable’ did not appear.

As a result, government ministers were obliged to change tack and argue instead that the public sector pensions were ‘unfair’ for those in the private sector who have little or no pension – as if the employer pensions’ contribution holidays, negative stock market returns and widespread scheme closures were the model to be emulated.

But who is this riding in over the horizon to rescue the government? None other than ex-New Labour minister John Hutton himself. The author of the Tory attack on public sector pensions denies his evidence demonstrates that the pensions are indeed affordable.

He refers to his own now-famous fan chart which shows public sector pension costs falling from 1.9% of GDP currently to 1.4% of GDP in 50 years’ time as being “taken out of context”.

How was this key projection arrived at? That’s set out in the report itself:

“[We] asked the Government Actuary’s Department (GAD) to project future public service pensions expenditure. It projected benefit payments to fall gradually to around 1.4 per cent of GDP in 2059-60, after peaking at 1.9 per cent of gross domestic product (GDP) in 2010-11.”

What assumptions were the GAD working with? As itemised in the note to the graph, a key set of variables are included. In Annex C to the interim report these are detailed.

Productivity is assumed to rise at the same rate as in prior years, the public sector workforce is expected to shrink over a number of years and suffer a pay freeze, then grow later and life expectancy is projected to continue its steady increase. The Retail Prices Index is assumed to grow faster than the Consumer Prices Index, as it always has.

But Hutton has changed the terms of the debate.

He argues now that the pensions’ costs are ‘sustainable’ but whether they are ‘affordable’ is a political judgement:

“That completely misreads the entire report. I was trying to talk about sustainability. That can be measured as total cost proportion of GDP. Affordability is a different judgement, a political judgement.

“The economics, looking at the future costs of pensions is not. That’s objective. The thing that is wrong is for people to say that because there is this one table showing predicting it to fall over 50 years.”

Taking a leaf out of Evan Davies’s book, I too searched the Report (pdf) for the word unsustainable. The word appears only once, on page 77. And this is in the theoretical case employee contributions are kept low requiring employers to contribute more, which could lead to a scheme being ‘unsustainable’.

Since this is the opposite of what is happening, with employees contributing much more, the theoretical example is irrelevant to current circumstances.

He also, quite misleadingly, says it is the cap and share system (significant rises in benefits to be capped and employees to make a greater contribution towards them) which produces the fall in pension costs as a proportion of GDP. But this is not true.

As his own Interim Report (pdf) shows, the effect of the scheme proposed has only a very small effect in reducing costs, because it is unlikely to affect very many pensioners: 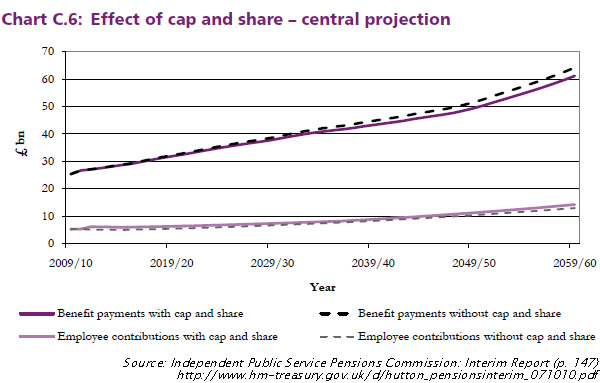 The reality is that Hutton has made a ‘political judgement’. It is the same as the Tories. This is that public sector pensions must be reduced not because of costs – that is already happening.

They must be reduced because they are a cost to any businesses seeking to take control of newly-privatised functions of the public sector, as set out in the first point of Hutton’s Terms of Reference, which states the Commission is to have regard to: