Liberal Democrat Andrew George MP sets out where peers need to change the health and social care bill where it stands - making sure that remains a service where patient service is put ahead of private profit. 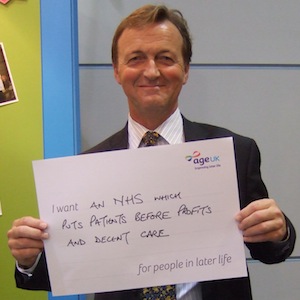 Andrew George MP (Liberal Democrats, St Ives) is a member of the health select committee; ahead of today’s ‘Topical Issue’ discussion on the NHS at Lib Dem party conference, Mr George writes an open letter to the House of Lords on how peers need to change the bill to safeguard the service.

I used these words when I addressed our party’s spring conference in Sheffield this year during the debate which soundly castigated the government’s controversial Health and Social Care Bill and which precipitated the unprecedented ‘pause’.

In spite of the excellent work of both Nick Clegg and Paul Burstow in securing important concessions after the ‘pause’ – about the role of Monitor, broadening the clinician base of the commissioning groups and much else – the bill we conveyed to the House of Lords still puts at risk many of the core values and strengths of the NHS.

That is why I maintained my opposition to this bill, proposing more than 40 amendments at Report stage, voting against the government and helping to persuade some of my colleagues to do the same.

We have to remember that the bill breaks the coalition agreement; is based on the false premise that the NHS performs poorly in comparison with health systems across Europe; and represents the biggest upheaval of the NHS in its history at precisely the time it really needs stability and certainty.

The bill runs the very high risk of:

• Producing a national health service which is driven more by private profit than by concern about patient care;

• Risks undermining emergency services through the fragmentation of health systems;

• Represents a major missed opportunity to produce a health service that is more accountable to the patients and communities it serves; and

• Fails to capitalise on the opportunity to significantly streamline the pathways between health and social care.

Although we are concentrating our efforts in seeking to constrain a largely Tory-driven policy, we should never let Labour get away with their claims to have been adequate custodians over the last decade.

They paved the way and lay the foundations for this marketisation of our health service. It was they – with Tory support – who introduced Foundation Hospitals, who wasted billions of pounds paying private companies for operations they never performed and who wasted billions more on a false ‘choice’ computer system.

Nevertheless, the bill has now gone to the House of Lords with Liberal Democrat criticisms ringing in the government’s ears. I hope that will fortify Liberal Democrat Peers and cross bench allies to wring telling concessions from the Ministers.

I’m still excited about coalition politics. Of course the Conservatives are still, at one level, our mortal enemies (I don’t doubt the feeling’s mutual!).  But grown up politics thankfully means an end to ‘yah-boo’ tribalism: working together where we agree; seeking compromise where we don’t; and when we fail to achieve compromise, we widen the debate – consult more widely, pause, listen, slacken off the Party Whips and seek a more transparent reconciliation.

A narrow, heavily-whipped and forced government victory will put our NHS at risk. A popular reconciliation could save it. The Liberal Democrats should be the architects of that reconciliation.

For a comprehensive overview of the problems remaining in the Health and Social Care Bill see also:

The NHS needs reform and accountability – not the opening up of the market – Debbie Abrahams MP, July 14th

16 Responses to “Lib Dem MP tells Lords: How the NHS bill needs to be changed”