The Mayor needs to call on the government to radically reform tenure and taxation, to restore a housing budget that can deliver high quality homes and communities. 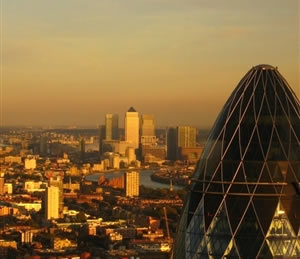 The terrible headlines about our housing crisis didn’t come as a surprise, they’re depressingly predictable. When I charted the failure (pdf) of Ken Livingstone and Boris Johnson to deliver London’s housing last year, I found many of the same problems described in the Pro-Housing Alliance report on London’s housing crisis.

The alliance’s recommendations show they are solutions. In fact, if you look at one problem – the terrible state of many private rented homes – you don’t have to look far to see them being taken seriously.

Newham council have piloted “selective licensing”, where they force all landlords in a specified area to be licensed.

This enabled them to enforce health and safety regulations and take bad landlords out of business. They now want to roll this out across the whole borough.

This is important because problems crop up across the market, from vulnerable, poor tenants to well-off professionals trying to raise a family. Too many tenants either put up with bad conditions and bad landlords or just move on, worried that if they raise any problems they’ll be given notice to leave.

This practice, called “retaliatory eviction”, is sadly familiar to many people renting privately. But the government refuses to look seriously at this problem.

In other countries there is specific legal protection against retaliatory eviction, and the basic private tenancy agreement is much longer – see the appendices of this handy report (pdf).

In Ireland, for example, after six months a tenant gets an automatic extension of three-and-a-half years and the landlord has to give a specific reason to evict. In the UK after six months your landlord can boot you out with two months notice, and they don’t need to give a reason.

The government’s main response to this crisis has been to tear up planning regulations. This will do little (pdf) to increase supply to the levels the Pro-Housing Alliance demand, or to reduce land values so making homes cheaper to buy and build. Nor will it deal with poor conditions or security of tenure.

It will probably just lead to poor quality homes with small rooms in sprawling car-dependent suburbs.

When I was young, back in the 50s, councils were in full post-war swing building their own housing in response to the problems of poor condition, high prices and bad landlords. I have happy memories of growing up in a council house with a nice big garden front and back, a secure tenancy and a rent my parents could afford.

In fact, as Graph 1 shows, in the last 60 years the only time we’ve really built large numbers of houses was when councils built up to half of them. This increased the capacity of the whole construction sector, brought forward land and housed millions.

When this stopped, the private sector never filled the gap. 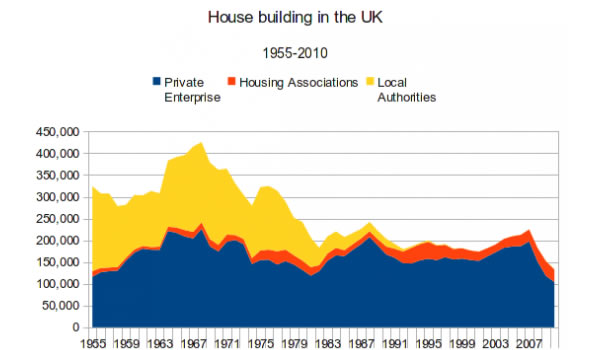 But today, council houses are seen by many young people as an anachronism, something for poor single mothers and the homeless. I have long lobbied the Mayor of London and his predecessor to build more council and housing association homes.

Why can’t rented council and co-operative housing become a tenure of choice again?

One of the Pro-Housing Alliance’s recommendations is to introduce a tax on land values. This would do much more to depress the price of land than a bonfire of planning regulations, making housing more affordable and new development cheaper. It could also raise billions to invest in new public housing.

Another solution they propose is the Community Land Trust model. This is a kind of co-operative that can offer permanently affordable home ownership. They enable people to take a long-term stake in a home of their own without the prices rising faster than incomes.

I have spent three frustrating years tracking the Mayor’s lack of progress on delivering one in London. Last year I published a short report (pdf) pressing him to take some simple steps to make it happen, and take the idea mainstream.

The Mayor urgently needs to call on the government to radically reform tenure and taxation, and to restore a realistic housing budget that can deliver the high quality homes and communities we need.

34 Responses to “Why isn’t Boris coming up with any solutions to London’s housing crisis?”