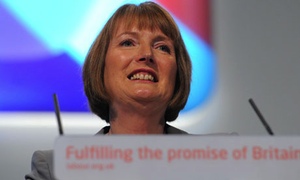 Harriet Harman closed the Labour party conference in Liverpool today with a call to arms, hitting out at the coalition’s attacks on young people, the Lib Dem-backed Tory plans that could see millions of Britons pushed off the electoral register, and Boris Johnson.

“The independent Electoral Commission warn that this could deny millions of people the right to vote. The Tories hope it will help them win the election.

“That is a shameful assault on people’s democratic rights and we will expose it and campaign against it. Parliament has no right to take away people’s right to vote. The government cannot be allowed to get away with it.”

Harman further hit out at the Lib Dems’ claims to have progressified the coalition, saying:

“The Lib Dems boast of being a brake on the Tories. So what happened then.

“On tuition fees. On VAT. On police cuts. On the NHS. Clearly the brakes failed. But there’s no doubt whose in the driving seat. It’s clear whose at the wheel – this time it’s not Chris Huhne – it’s the Tories.”

Contrasting the Labour party’s approach to engaging young people with the coalition’s assault on them, the Labour deputy leader added:

“[We are offering] a stronger voice for young members of our party. We’ve heard those voices this week. Many at our conference for the first time. Some as young as 16. Speaking with such conviction.

“With the Tory/Lib Dem attack on: The Future Jobs Fund. On EMA. On tuition fees. The government have hit the prospects for young people. But young people are hitting back.”

And on Boris, she said:

“[Cameron, Osborne and Johnson] are so removed from people’s lives. But I hear that they do watch TV from time-to-time and I hear they love Downton Abbey. The only problem is they think it’s a fly-on-the-wall documentary…

“This week we’ve had a sharp focus on our campaign for the Greater London Assembly and for Mayor of London. What does Tory Boris Johnson stand for? Higher fares for Londoners. Lower tax for bankers.

• You can read Harman’s speech in full here.

14 Responses to “Harman: Lib Dems “colluding” with Tories to deny millions the vote”