It’s all to play for on the Financial Transaction Tax, aka the Robin Hood Tax - despite George Osborne’s best attempts to frustrate the campaign. 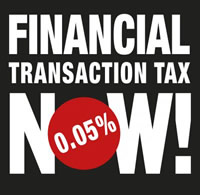 EU finance ministers (known as Ecofin) met informally in Wroclaw, Poland at the weekend, and didn’t get very far on the two issues of a Financial Transactions Tax (FTT) or the crisis in the eurozone. But they did manage to wrap up their inconclusive deliberations early to avoid a 50,000-strong trade union demonstration against austerity and for jobs and growth organised by the ETUC.

Tim Geithner, Treasury Secretary in the US, flew in to lecture European politicians about needing to show political leadership, and reiterated his continuing opposition to an FTT.

George Osborne also reiterated his view that an FTT needs to be global to work – despite the existence of an FTT in the UK on share dealing (the 0.5% stamp duty) which raises about £3 billion a year.

Both are mostly concerned about the financial centres of New York and London losing their competitive edge, but of course a move that extended the UK system to cover Europe would do the exact opposite even on Osborne’s own logic, and as the Robin Hood Tax campaign and the Financial Times have (the latter only today) argued, the key is to design FTTs that can’t easily be avoided by moving to a different city.

Geithner’s intervention was received frostily (this is a euphemism – we understand the Austrian Finance Minister, whose government has championed an FTT for years, actually shouted at him). After all, it’s all going so well on Geithner’s beat that his intellectual authority is unchallengeable.

Osborne’s approach was widely seen as a bargaining position, designed to ensure whatever deal is done is not too damaging to the London financial interests he is so keen to represent.

No one actually expected FTTs even to be an issue at this Ecofin: the EU proposal will come at the formal Ecofin at the start of October, and then be pursued at the G20 summit a month later (G20 finance and development ministers – reflecting the FTT’s origins as an innovative method of financing overseas aid – will also discuss the matter in Washington DC next weekend).

And Osborne is outnumbered. Last week, Denmark elected a new government with a manifesto commitment to support FTTs unilaterally (so they will certainly drop the previous Danish government’s opposition to a European measure) – leaving the Czechs and Swedes as his only major allies.

The Danes have joined the French and Germans who have submitted their own detailed proposal to the Commission, along with the Austrians, Belgians, Greeks and Spaniards who have supported the measure for some time. The Netherlands government is keen to insist on the UK signing up rather than adopting the fall-back of a eurozone tax, so the British government will come under substantial lobbying over the next few weeks. Hence Osborne’s robust initial position.

So it’s all to play for – and as the latest Robin Hood Tax campaign, released virally today, says, we’re nearly there.

Tell everyone you know.