Whatever the rightwing attack dogs say, the cost of public sector pensions are due to fall as a proportion of GDP. 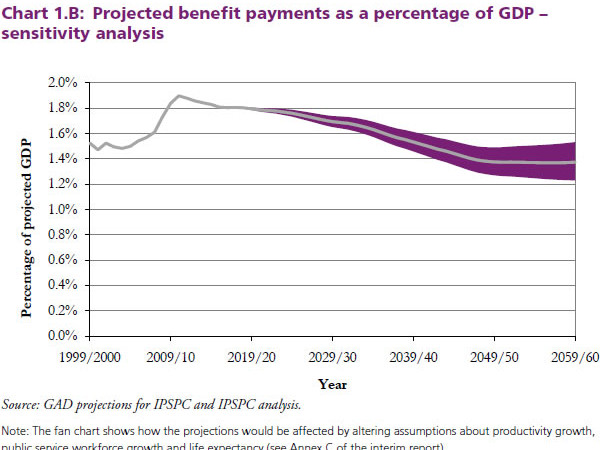 As soon as the TUC voted to undertake industrial action in defence of public sector pensions on November 30th, the right-wing ideologues were doing the rounds of TV studios.

Attack dogs like Mark Littlewood, Director-General of the Institute for Economic Affairs, laid out their central argument, which is that, both in terms of short-term deficit reduction and long-term debt maintenance, public sector pensions are unsustainable.

You are likely to hear that a lot over the next few months. However, it is worth repeating again and again and again that it is not true. As reported by Stephen Henderson on Left Foot Forward in July:

“The Office of Budget Responsibility’s July 2011 Fiscal Sustainability report (pdf) looks long into the future (2060) and guesses at the likely proportions of GDP that might arise as the population becomes more elderly.

“The assumptions are based on current policies, not government proposals. Confirming earlier findings in the Hutton Report (pdf), they clearly predict the cost of public pensions will fall from 2% of GDP to 1.8% in 2030 and 1.4% in 2060 – without any of the current Hutton proposals.”

And, as written by Michael Burke earlier that month:

The justification for the attack on public sector pensions is rapidly being unravelled. The chart below has had a good airing and even made it onto the BBC’s main news programme last night.

Ministers Francis Maude and Justine Greening have attempted to supplement this point with the claim that the costs will rise ‘as we are all living longer’. But this factor is already included in the Hutton (pdf) calculations of falling costs, as rising life expectancy is included in the calculation (clearly noted in the chart).

Burke went on to argue:

“The real reason for the attack on public sector pensions is actually set out in the terms of reference that Hutton accepted from the government.

“In the very first point of the terms of reference Hutton must have regard to:

“The ‘greater plurarity of provision of public services’ is Treasury-speak for privatisation; therefore the very first objective of the review is to ensure private firms can take over the functions of the public sector services – and that they can do so without the costly inconvenience of providing pensions.”

Whatever is being disputed here, it is not about affordability. As the right-wing noise machine roars into life, remember that fact.