The government should urgently explain the alternatives to Conditional Fee Arrangements, writes Sound off for Justice’s Jonny Mulligan. 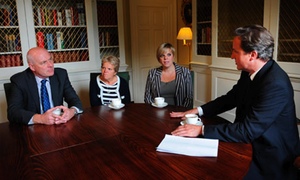 Today, the Dowler family have asked the prime minister David Cameron and his deputy Nick Clegg to stop the unjust and unfair legislation that will significantly weaken the ‘no win no fee’ mechanisms they used to fight their case against News International.

The government’s response was to issue a statement saying:

“The government is absolutely committed to ensuring that people can access the justice system regardless of their financial situation, which is why we are committed to maintaining ‘no win no fee’ arrangements.

“There are many deserving cases brought before the courts. But we have to stop the abuse of the system by others pursing excessive, costly and unnecessary cases.

“Under the current arrangements, innocent defendants can face enormous costs, which can discourage them from fighting cases. This simply isn’t fair.

“So in order to ensure that the no win, no fee cases continue to provide fair access to justice for all, we have to make changes.

“By balancing the costs more fairly between the claimant and defendant, these changes will ensure that claimants will still be able to bring deserving claims, and receive damages where they are due, and most importantly they will make the no win, no fee system sustainable for the future.”

But how will this actually work? The problem we have is that we still need Secretary of State Ken Clarke and minister Jonathan Djanolgy to make it clear what their alternative to the current system will be.

So we are in a no man’s land where the government say they will protect access to justice but they are going to cut one of the key mechanisms that allows normal families and normal people fight their cases.

Under the existing regime, a client with a CFA will never have to pay his lawyer’s costs. The lawyer is able to claim an additional “success fee” of up to 100% of his base costs from the other side if his client wins the case; this allows the lawyer to structure their practice to accommodate the additional risk being taken of potentially not getting paid at all if the case is lost, and therefore make it financially viable for law firms to offer CFAs.

The fact the success fee is recoverable from the losing party means that the client receives their full compensation if they go on to win.

Minister Jonathan Djanolgy has talked about giving lawyers a ten per cent uplift, but this is not in the bill, so he is asking for parliament to vote on legislation while presenting half-baked solutions to problems raised.

CFAs only protect clients from their own lawyer’s costs; if the client loses, they will still be liable  for the winning side’s costs. Where the other party is for example a large organisation, the risk of having to pay these costs, and therefore risk financial ruin, can inhibit many clients from pursuing their claim, regardless of the strength of their case.

In order to mitigate this risk, clients can take out After the Event (ATE) insurance, which means a single manageable premium is paid for a policy that will cover the other side’s costs should the client lose. If the client goes on to win, this premium is payable by the losing party, meaning that the client will still receive their full compensation.

In combination, CFAs and ATE insurance provide much-needed access to justice for a large demographic that do not qualify for legal aid, either due to their income or because of the nature of their case, and both services are financially viable for those that offer them.

This means clients would have to pay the premium – even further reducing their damages. Victims who have suffered harm due to the wrongdoing of others will lose a significant proportion of their damages. Many claims will simply become uneconomic to pursue, and in the business context, claimants will be less able to pursue debtors.

In cases where there are difficult legal issues, the facts are complex, or a defendant insists on taking the case to a full trial, the amount of success fee (as an absolute amount) due to a client’s lawyer could substantially exceed the 25 per cent pool of the damages a client is claiming – butunder the changes the lawyer could not recover more than this 25 per cent.

Because of this shortfall, law firms will be less able to cover the costs of those CFA cases they lose, and as a business decision would be forced to stop providing representation for people with these kinds of difficult but meritorious cases. Furthermore, in combination with other proposals, the ATE insurance market is likely to shrink, making it either unavailable or unaffordable to many people.

The effect of the proposals is therefore not simply to reduce the client’s compensation, but the very availability of CFAs and ATE – and therefore access to justice – for millions of people who do not qualify for legal aid.

•Without Legal Aid how do victims’ families take on the News of the World? – Jonny Mulligan, July 7th 2011