Richard Carr surveys the overall political landscape before discussing the role community ownership might have to play in defining Labour in opposition. 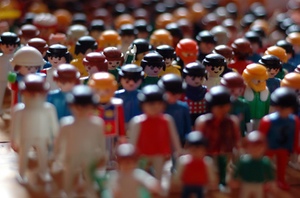 Richard Carr is a Research Fellow at Localis

Consensus is building that Labour needs a policy hook beyond “too far, too fast.” It is clear what they are against – be it perceived excessive privatisation of the NHS, swingeing spending cuts across the board, and specific reforms in areas from pensions to planning – but not yet clear what they stand for.

The propensity to delay nailing their colours to any ideological mast is understandable (few oppositions want to commit themselves too soon), but it is interesting to consider what Labour’s “big idea” might be with the coalition now well over a year old.

This piece briefly surveys the overall landscape before discussing the role community ownership might have to play in such a process.

There has been much discussion about motivations behind the recent English riots, and what it says regarding people’s stake in society.

The debate, broadly speaking, initially saw the right condemn the events as feckless criminality, whilst the left sought more underlying explanations – a tacitly, albeit ill, thought out reaction to general poverty, or revenge for specific government action, particularly on EMA and tuition fees.

After such early polarisation the debate has become more muddled – with liberal Tories acknowledging the impact of the coming cuts, and Labour clinging less to its initial tactics (condemning the specific riots whilst segueing into anti-coalition rhetoric) as time has passed.

Causes for the riots were by no means monolithic. Yet part of the reason Labour has found its response generally so difficult to articulate is, as with much of post-May 2010 policy, that its 13 years of government has left such an ambiguous legacy.

On the one hand, a decade of continual growth created historically low levels of unemployment, and thereby created its own mandate for office, almost regardless of what was achieved. The issue was that there was arguably no overarching, suitably uniform and genuinely engaging narrative to sustain the party’s popularity when the slump hit.

Once the financial house of cards collapsed, redistributing the growth created by public-private partnership was rendered literally hollow: you cannot, after all, redistribute negative 4.9 per cent growth (2009) – and voters have historically preferred the Conservative party to rearrange the deckchairs on any financial Titanic, as in 1931 and 1979.

Cameron’s Big Society message poses some interesting questions for the Labour party which cannot just be dismissed out of hand. If governmental cuts (or the perceptions regarding) were a partial cause of the recent riots, the numbers of locals willing to clean up the destruction afterwards lent the administration’s rhetoric of volunteerism some propagandistic justification.

In times of peril, so the narrative has gone, people take solace in their ability to act in concert with their friends and neighbours.  Politicians helped get communities into this mess by engendering a general powerlessness, and such residents have lifted (and swept) themselves out of it. It doesn’t particularly benefit a sitting predominantly Conservative administration overly, but nor does such a pervasive anti-politician, anti-expert zeitgeist necessarily serve to aid a party that has historically promised – and, as Greg Clark has acknowledged with reference to 1945, achieved – much through top-down planning, and introducing a centrally administered welfare state.

Maurice Glasman has received much coverage for his Blue Labour project, and its merits are worth re-considering.

If Tony Blair chided the party for failing to appreciate individual aspiration, Glasman has essentially asked, “aspiration to do what?”. Pointing to village pubs and football clubs, he argues Labour’s mission going forward should be to restore the co-operative model, and the collective’s right to own.

Such an image – in an era of chain pubs and international ownership of much of the Premiership elite – has been derided as being anachronistic, and by using conservative imagery whilst playing on already conservative (Edmund Burke’s “little platoons”) ground, somewhat treacherous. Labour’s historic role, critics argue, is not so much to save the village pub (though the 2010 manifesto, in a rare concession, promised to establish a new fund for community ownership to do just that), but to help re-distribute the wealth between those sitting at the bar.

The Localism Bill poses questions Labour must answer, however. Creating a Community Right to Buy and the ability for local authorities to designate buildings as Assets of Community Value, it has appeal to sentiments of anti-monopoly capitalism on the left, and the traditionalism of the right. Similarly, given the increased role afforded to parish councils under the bill (including the power to draw up a neighbourhood plan and access to monies created by the Community Infrastructure Levy), this is terrain Labour will have to engage with further, particularly if they wish to give due acknowledgement to the recent phenomenon of bids for ‘urban parish council’ status.

Chris Williamson MP has made some sage points regarding the potential lack of financial resource hindering any community right to buy (easier for richer areas, clearly, than some Labour voting constituencies), and there are ways Labour can nuance these questions. But more needs to be said. Gordon Brown became PM pledging to ‘strengthen local communities with new powers’, and his speech to Citizens UK on the eve of the previous election was widely praised for its humility in front of the volunteers he called ‘brothers’. Labour can go further here.

By seriously exploring options to resource this community right to buy Labour has the chance to put a distinctively leftist flag on current coalition terrain, and signpost a new dynamic between the party, the state, and twenty-first century capitalism.

Ed Miliband’s foreword in Glasman’s The Labour Tradition and Politics of Paradox calls for a:

“…new approach to the relationship between our banks, our industry and our communities.”

Blair rewrote Clause 4 to move the party constitutionally beyond a position of seeking “common ownership… of the means of production”, to placing “opportunity in the hands of the many, not of the few”.

Miliband seeks to broaden the basis of Labour’s appeal through redrafting Clause 1. At its heart is an emphasis on community organising and an attempt to reach out to broad ‘supporters’ as well as party members. Whilst this may well capture dissaffected Lib Dems, it also offers hope to the community ethos at the heart of the Blue Labour agenda.

To tackle both the contemporary ills of rapacious capitalism and political apathy, Glasman has helped kickstart a debate over communal ownership. Labour stalwarts have weighed in, with Hazel Blears’s contribution to Glasman’s volume urging the party to:

Where New Labour redefined the relationship between market and state in left wing thought, Ed Miliband now has the opportunity to reassert a lost tradition of reciprocity and co-operative capitalism.

Whilst the precise role of statist, and much loved, organisations such as the NHS needs to be hammered out in such a conception, the potential for community ownership is myriad – offering a (presumably during the next parliament more resourced) alternative to the Big Society, whilst building upon existing social structures.

Community ownership is of course only one piece in the jigsaw, but, crudely put, if people have more of a stake in their society, they are less likely to trash it.

Restoring faith in politicians, and achieving Ed Miliband’s Good Society, will rely as much on the community hall as it does the corridors of Westminster. The debate is worth having.