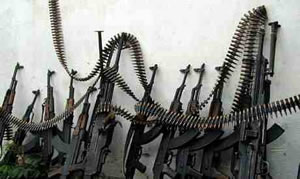 It’s business as usual in the murky world of the arms trade. This week, ahead of the biennial Defence and Security Equipment International exhibition, Liam Fox, the defence secretary, delighted in telling us just how “proud” he is of the UK’s arms manufacturers.

Despite its huge controversies, it still had a “key role” to play, particularly in “enlightened international engagement”.

This ‘engagement’ sees Britain exporting arms to some of the world’s most repressive and authoritarian regimes, many of whom were present – including representatives from Bahrain, fresh from killing its own citizens in a crackdown on anti-government protests back in the spring –  and showing off their fighter jets, missiles, tear gas, drones and other weaponry, all on display at London’s Excel Centre.

Trailing well behind the US, the UK is home to the world’s second largest defence and security sector. A report out this week by Aerospace Defence and Security, a UK trade organisation, showed why, irrespective of their political leanings, governments see it as a cherished industry.

Saudi Arabia – number 160 (of 167 countries) in the Democracy Index – is the biggest buyer of UK weapons, with its contracts bringing the latter £300 million last year.

According to the Campaign Against the Arms Trade (CAAT), earlier this year, Saudi Arabia:

Arms destined for Bahrain, as well as Libya, were suspended in February.

“…we will not authorise any exports which, we assess, might provoke or prolong regional or internal conflicts, which might be used to facilitate internal repression.”

In April, a report by MPs, hailed as ‘ground-breaking’ by its committee chair, and issued at the height of the Arab uprisings, spelled out the bleeding obvious:

“…both the present government and its predecessor misjudged the risk that arms approved for export to certain authoritarian countries in North Africa and the Middle East might be used for internal repression.”

It highlighted the fact that in the months and years leading up to the uprisings, the UK had approved £2.3bn worth of deals in arms exports to countries such as Egypt and Yemen.

In particular in Libya, another report showed licences had been granted for the sale of items used for ‘crowd control’, such as smoke canisters, stun grenades and anti-riot/ballistic shields. Indeed, these weapons were being sold to the Gaddafi regime right up until the end of last year.

Yet in July, the government themselves concluded:

“…there was no evidence of any misuse of controlled military goods exported from the United Kingdom.”

But in response to these claims, an incredulous Sir John Stanley, chairman of the arms controls committee, said:

“I am not surprised by the government’s stated outcome of its review.

“Given that there has been, understandably, an almost total absence of official observers in close proximity to the violent internal repression that has been taking place, and given also the fact that the UK Government approved arms exports including machine guns, sniper rifles, combat shot-guns and ammunition as detailed in Annex 4 of our Report were not emblazoned with Union Jacks, it is hardly surprising that the FCO could safely conclude [this].”

Depressingly, things continue as before. Liam Fox’s strong support for the defence sector merely sits neatly alongside a previous quip by the defence equipment minister, Peter Luff, that:

“…there will be a very, very, very heavy ministerial commitment to (arms sales). There is a sense that in the past we were rather embarrassed about exporting defence products. There is no such embarrassment in this government.”

Or by Gerald Howarth, the international security strategy minister:

“…this government has been clear from the outset, and so have I: we are proud to support the biggest defence exports drive in decades.”

And of course David Cameron, who used his chance as the first world leader to visit Egypt following the toppling of Hosni Mubarak, to take along a delegation of some of Britain’s leading figures in the defence industry.

No doubt the UK will continue to play lip service to human rights concerns when exporting weapons, suspend trading if and when a controversy arises, wait for the dust to settle, and recommence sales as soon as it possibly can.

To do otherwise would be, in the prime minister’s words, “at odds with reality”; a reality that puts money and a supposed ‘national interest’ above all else.