Shirley Williams still has "huge concerns" over the coalition's NHS reforms, and says ministers have been "bewitched" by the "flawed" US healthcare system. 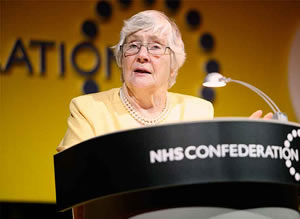 Shirley Williams still has “huge concerns” over the coalition’s NHS reforms, and says ministers have been “bewitched” by the “flawed” US healthcare system. Writing in tomorrow’s Observer, Baroness Williams expresses fresh doubts over the revised Health and Social Care Bill and raises a number of issues she says must be addressed.

“Despite the great efforts made by Nick Clegg and Paul Burstow, the Lib Dem health minister, I still have huge concerns about the Bill. The battle is far from over…

One of her major doubts is whether the Secretary of State will still be legally bound to deliver “a comprehensive health service for the people of England, free at the point of need”.

She is also concerned about the expanding role of the private sector, and is worried about the way foundation trusts are being allowed to take on more private work.

“I am not against a private element in the NHS, which may bring innovatory ideas and good practice, provided it is within the framework of a public service – complementary but not wrecking.

“But why have they tried to get away from the NHS as a public service, among the most efficient, least expensive and fairest anywhere in the world? Why have they been bewitched by a flawed US system which is unable to provide a universal service and is very expensive indeed?”

Back in February, Baroness Williams said she couldn’t support the NHS reforms as they were then, calling the scale of the reforms “too great” with “too many questions unanswered”. In a column in the Times (£), she questioned the cost of the reorganisation; the accountability of the new GP consortiums; the role of the private sector; and patient choice.

This weekend, as part of the “Big NHS Weekend”, thousands of health campaigners have been out across the country warning the public the NHS remains under threat, despite what they call the ‘superficial’ changes announced after the government’s recent ‘listening exercise’. Events took place across 60 local areas, ahead of the Bill’s return to Parliament this week.

The latest poll on the reforms, by GFK/NOP for the NHS Support Federation, shows only a third (33%) of those surveyed believe the Bill should be passed in its amended form, with nearly half (49%) wanting the Bill scrapped altogether.

“The Tory-led Health Bill is a massive threat to the NHS that we know and love. With the plans about to come back before Parliament, we’re calling on people to join our national campaign to stop David Cameron’s government from destroying our NHS…

“Nobody should be fooled by the superficial changes that David Cameron announced after his so-called listening exercise. He’s already pushing our NHS to breaking point, and this wasteful reorganisation is simply a recipe for chaos.”

“Our health service is under siege. If anyone thinks that the NHS is safe in the Coalition’s hands – they better think again. The Health and Social Care Bill is a Trojan horse bringing in private health companies to take over our health service. In Tory-ward, money talks and if patients don’t have the cash they will find themselves waiting at the end of a very long queue.”

“We cannot allow the privatisation of the NHS. The coalition promised an NHS safe in their hands. They lied. More than 50,000 jobs will go and waiting times are up. With this bill, profit-grabbing private healthcare companies will have carte blanche to dismantle the NHS street by street.

“The promise of universal access at the point of need for all, regardless of the ability to pay will be crushed.”

To join in the campaigns to save the NHS:

• Sign 38 Degrees’s petition calling on the government not to break up the health service and “hand it to private healthcare companies”, to “listen to the real experts”, not to “rush through massive changes”, and “protect patient care”;

• Email Lib Dem MPs ahead a meeting of a crunch meeting of the Parliamentary party on Monday, via UNISON;

• Join the TUC’s “online vigil for the NHS”, adding your face to the mosaic, “to show Parliamentarians the level of concern around the country about the threats to our National Health Service”.

50 Responses to “Baroness Williams: Coalition “bewitched by a flawed US system””