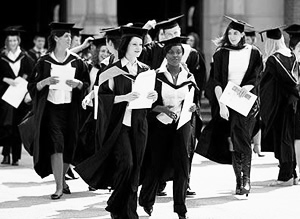 The UK is the second most popular destination for foreign students, after the United States, but we must not get complacent and must redouble our efforts to ensure we continue to attract the best and brightest students and academics to our shores.

Equally, we cannot afford to ignore emerging competition for our talented home students. English language degrees coming in at far less than £9,000 a year in Holland, for example, prove that maintaining our proud international standing will take more than reputation.

Earlier this week a report (pdf) by chartered accountants, Grant Thornton, warned that the three biggest challenges UK universities face are changes to student visa regulations, the dramatic drop in government funding and coping with the new fees regime.

The changes to student visas as part of the government’s clampdown on immigration risks making the UK a less popular destination for foreign students, which, based on today’s figures, would be bad news for UK universities as they struggled to adjust to huge government funding cuts.

It is not just universities and our thriving educational export sector that would suffer though. In June, the home affairs select committee warned government plans to limit visas could result in a £3.6 billion loss from the British economy.

The government might think soundbites around immigration play well to a domestic audience, but they risk doing real harm to our universities and our reputation on the world stage. UK universities are enriched by the students and academics that come to this country to study, carry out research and share their knowledge.

Politicians must be very careful not to restrict academic access or make ill-judged comments that give the impression UK universities are closed for business.

• Give the international student market the credit it deserves – Ranjit Sidhu, October 1st 2010