With Parliament set to debate the Health Bill this week, new research shows 1.4 million waiting longer than the target times for treatment, diagnostics and A&E. 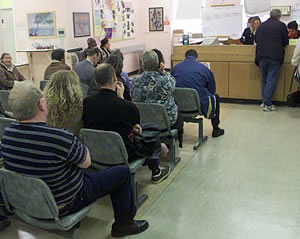 With Parliament set to debate the Health and Social Care Bill this week, new research shows 1.4 million people waited longer than the target times for treatment, diagnostics and Accident & Emergency since the election – a 54% increase in the number of patients suffering long waits for their diagnosis or treatment.

The analysis, based on official Department of Health statistics, shows more than 400,000 more people have suffered long NHS waits in the 14 months since the election compared with the most recent equivalent 14 month period under Labour.

“Labour put record investment into the NHS, and brought waiting times down to an all time low. Now, with little over a year of a Tory-led government, over 400,000 more people have suffered long waits for diagnosis and treatment.

“So much for David Cameron’s election promise to protect the NHS.

“The impact on patient services of David Cameron wasting millions of pounds on new NHS bureaucracy is becoming all too clear. Instead of railroading his Health Bill through Parliament, the prime minister should scrap his plans now and let NHS staff get on with the job of treating and diagnosing patients.”

This morning, Shirley Williams became the latest Liberal Democrat to hit out at the newly revised health reforms Bill, expressing “huge concerns” and describing ministers as being “bewitched” by the “flawed” US healthcare system. Baroness Williams expressed concern at the expanding role of the private sector and the way foundation trusts are being allowed to take on more private work.

So given all the doubts, the worries and the figures, can David Cameron really be trusted on the NHS? Is the NHS “safe in his hands”? And what lies behind his government’s constant undermining, unnecessary, costly reorganisation and flawed, widely opposed reforms?

“The Commonwealth Fund, comparing similar countries, puts the UK top for effectiveness, care and efficiency and for patient confidence, equity and safety; the UK is significantly less expensive than France, Germany and the US. Britain is the only country where those on below-average incomes are no more likely than the better-off to report trouble in paying medical bills or accessing health due to cost.

“Mortality from cancer and heart disease was falling faster than anywhere, while waiting lists were all but abolished. Labour’s spending yielded good results, despite bad deals on doctors’ pay and PFIs. When David Cameron told the Today programme in January that the NHS was “second rate”, he had to apologise sharpish.

“Yet he embarks on this great disruption, costing £2bn, just when the NHS faces its harshest financial squeeze. Funds are not ring-fenced as promised, hit by extra VAT, national insurance and inflation, plus £500m sliced off for social care. Ageing and new technology – new cancer drugs, mechanical hearts – add extra just to stand still. Waiting times are up, hospitals are declaring deficits and by next year, cash shortages will be critical.

“So why break it all up now?

“The only explanation is blind ideology, still there in the revised bill, revealed by the legal opinion commissioned by the activist group 38 Degrees, expounded by Dr Evan Harris, rousing the Lib Dems…

“Extraordinarily, this gigantic re-disorganisation is already happening, with the husks of PCTs already handing over without waiting for the act. So badly construed is this law that some of it will surely never happen. Politically hospitals will not be allowed to go bankrupt, as this envisages. (Research to be published shortly shows that hospital mergers neither save money nor improve quality.)

“Whatever the bill claims, of course, the health secretary, Andrew Lansley, will still have bedpans tipped over him in the Commons when the NHS erupts. People already protest against any hospital closure: imagine their wrath at finding local beds blocked with private patients to cover costs, or hospitals closed by liquidators.

“With every NHS organisation vehemently opposed, where’s the political profit?

“The only explanation is that the very existence of an exceptionally successful nationalised health service is such an affront to everything Conservatives believe in that it’s worth the political risk of demolishing it once and for all.”

96 Responses to “Safe in Cameron’s hands? Waiting times for treatments, tests, and A&E all up”