For all the hits his opponents try to land on him, Alex Salmond now has the air of a man who seems untouchable, writes Left Foot Forward’s Ed Jacobs. 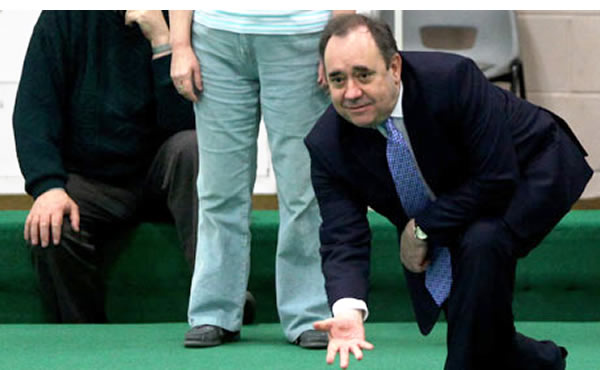 Unveiling his Programme for Government for the forthcoming year, Alex Salmond declared with all his usual modesty that the Scottish public would soon become the “independence generation”.

Yet, amongst all the Bills he announced would be brought forward for consideration by MSPs – including proposals for a single Scotland-wide police and fire service and the reintroduction of the SNP’s cherished policy of a minimum price of alcohol – the lack of any legislation to provide for a referendum on independence remained the elephant in the room.

The opposition did its best to attack the first minister as being, what outgoing Conservative leader, Annabel Goldie, described as “all talk, no action”, but the blunt truth is that for all the hits his opponents try to land on him, Salmond now has the air of a man who seems untouchable.

With opposition parties having so far failed to get to grips with the urgent need for a strong and credible alternative to Salmond, the SNP enjoying a healthy majority of their own at Holyrood and polling suggesting support for independence outstripping opposition to it, it is perhaps little wonder the Labour leader, Iain Gray, spoke of his “envy” at the position that the first minister was now in.

As an Editorial in the today’s Guardian concludes:

“Wanted: a Scottish opposition leader. Please apply to Holyrood, and soon. Must have firm views, ability to revive own party and lots of luck. Willingness to tackle Alex Salmond essential. All reasonable offers considered.

“Yesterday, in the absence of such a figure, Scotland’s first minister once again presented himself as the master of his nation. Elected for a second term this year with an unprecedented majority, Mr Salmond set out a legislative programme which makes up in bulk what it lacks in daring. His poll rating is strong and his opponents are in disarray.

“Both Labour and the Conservatives are searching for leaders, while Lib Dem support shrivels. The Tory frontrunner had to propose the abolition and rebirth of his own party to attract attention in England: an idea whose merits may attract everyone other than Scottish Conservatives.

“Even a modest man might have cause to be pleased with himself in such circumstances, and Mr Salmond is not known for his modesty. In that lies both his strength and his weakness. He set out a government programme that includes a the creation of a Scottish police force and plans for a minimum price on alcohol but he did little to confront Scotland with the more serious challenges ahead.

“These have less to do with the independence referendum that may come at some point (and what polls suggest is growing but still minority support for a breakaway) than financial reality.”

Yet not content with seeing off his opponents in Scotland, Salmond’s sight’s are now set firmly on London, using the economic malaise the country now finds itself to stoke up the grievances Scots have developed against the coalition.

Outlining the strategy, Eddie Barnes, Political Editor at The Scotsman, says of Salmond:

“His central argument was that the speed and scale of George Osborne’s deficit reduction plan would choke off growth. It is ‘voodoo economics’, he warned, lashing back at Scottish ministers in the UK government whose ‘lectures’ on his handling of the Scottish government he would be ignoring.

“Instead, Mr Salmond quoted from a triumvirate of international economists who, he argued, were all calling for government to loosen the purse strings, allowing more spending on public works. This is what he wants to do in Scotland, he said, but cannot while the Treasury holds the purse strings.

“Both chancellor Osborne and Chief Secretary to the Treasury Danny Alexander have repeated in recent days that the UK government is not for turning on their plans. This, they argue, will help keep down rates of borrowing, depress interest rates for families, and turn the UK into a “safe haven” amid the global turmoil.

“Both sides have therefore nailed their colours and their reputations to the mast. This has now become a battle of visions between London and Edinburgh on how to bring the country out of the economic mire. And the stakes are high: whoever has the right answer can expect to be rewarded if and when the independence referendum comes about.”