From numbers of involuntary part-time workers to vacancies per jobseeker, the job market is now clearly stagnating. 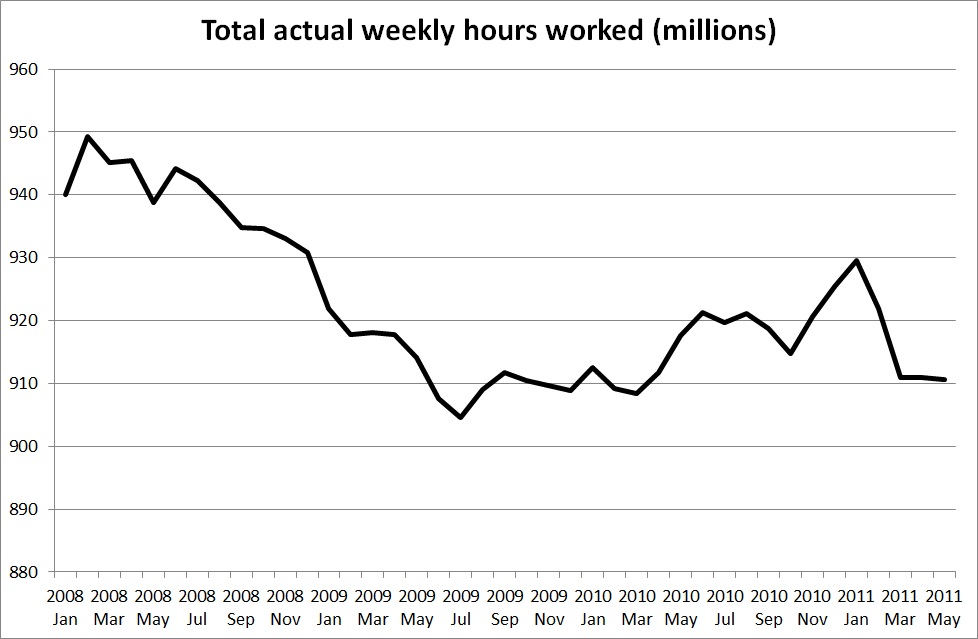 The employment figures from the Office for National Statistics show clear signs of stagnation. It would be unreasonable to talk about a crisis when employment is up 25,000 on the last quarter and 251,000 on 12 months ago, but the economy has moved on from the first half of the year, when all the headline figures were positive most months.

For one thing, we are still quite a way from recovering to pre-recession levels of employment. As my colleague Anjum Klair has pointed out, the UK still has fewer people in employment than in December 2007, on the eve of the recession (172,000 fewer, using today’s figures.)

And the headcount measure for employment isn’t the whole picture. As Nigel Meager has pointed out, the figure for hours worked looks a lot less rosy:

And both measures of unemployment have increased. The ILO measure rose 25,000 from the previous quarter, to reach 2,494,000. This is 32,000 higher than it was a year ago and it is now a year since the year-on-year figure was consistently coming down: 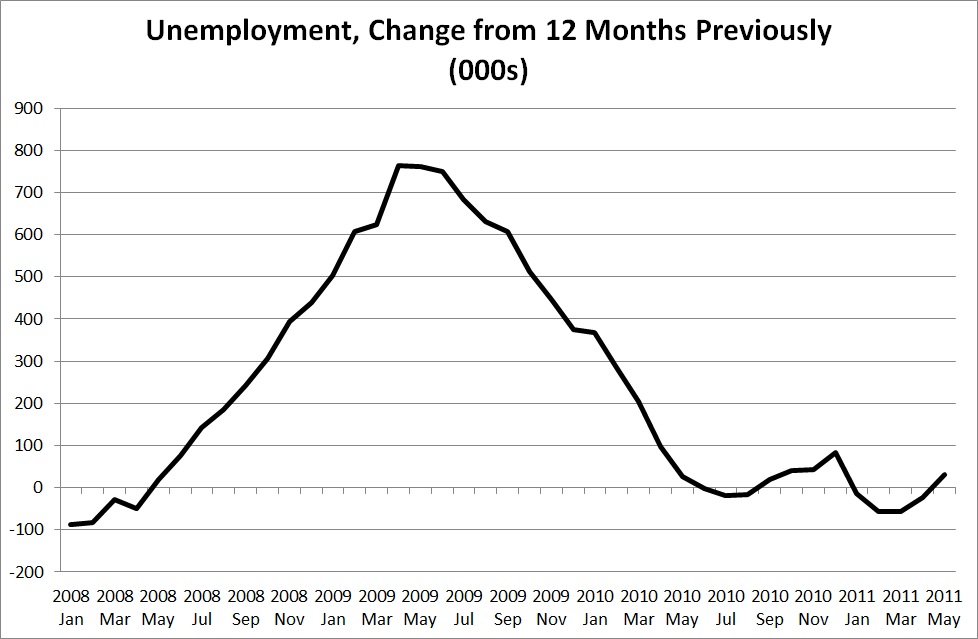 The number of people unemployed under 6 months started rising in February and the number unemployed over that amount has now started growing as well (though this could be a blip): 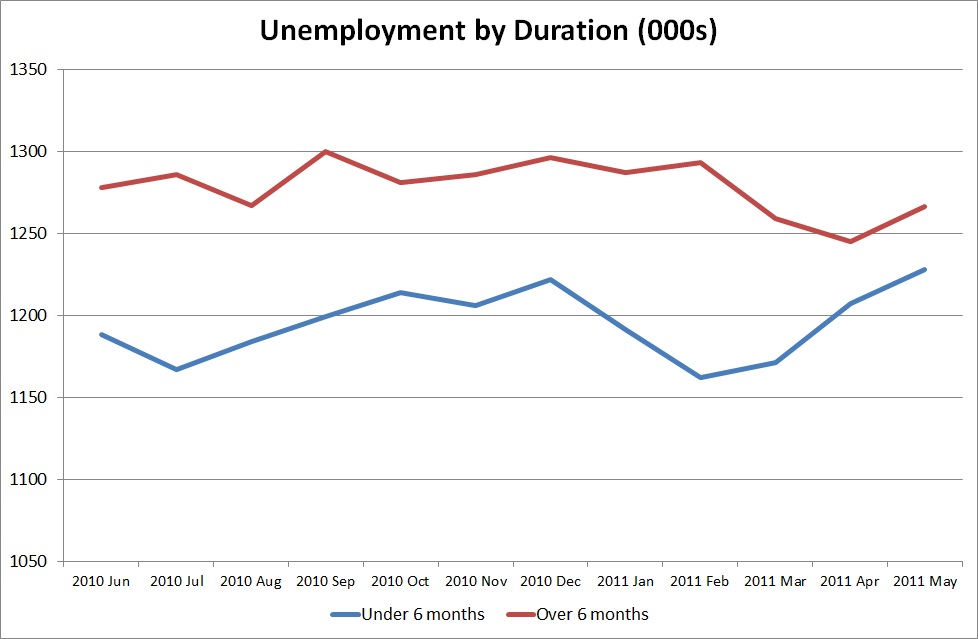 The claimant count rose again this month – in July it stood at 1,564,000, up 37,100 on June. This is an increase of more than 100,000 on the year and the chart for what has happened to this figure over the past three years is particularly depressing: 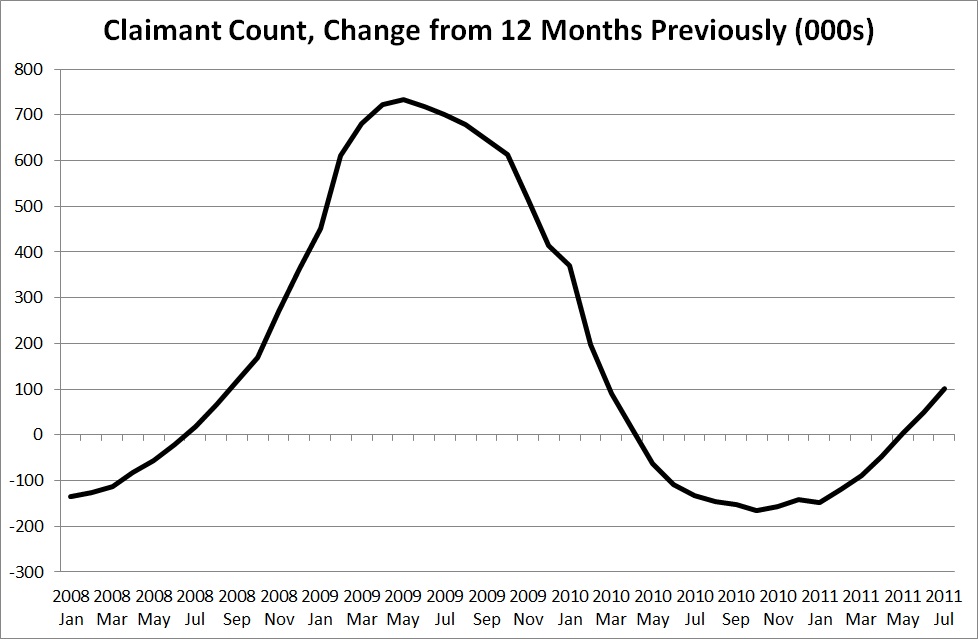 We cannot continue to blame this on lone parents being moved from Income Support(IS) to Jobseeker’s Allowance: the bulge resulting from the rule change that denies IS to lone parents whose youngest child is over seven peaked in the spring and the number of claimants in this group only increased by 1,050 in June. 390,068 people started a claim for Jobseeker’s Allowance in July, the highest figure this year and the third increase in a row: 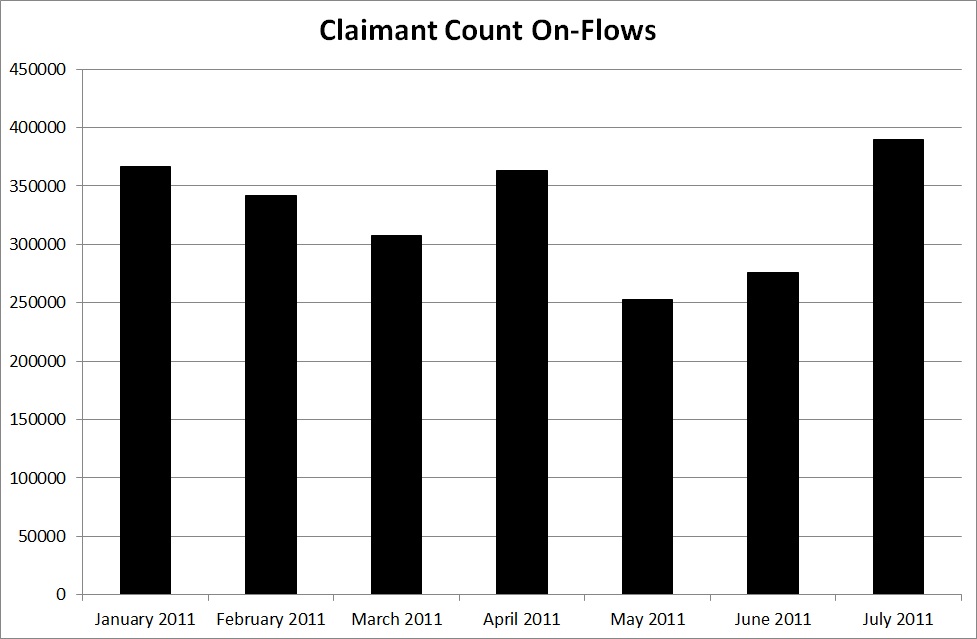 The number of involuntary temporary workers (those who say they are working in temporary jobs because they couldn’t get permanent  ones) rose again, to 601,000, the highest level since August 1998 and seems to be on  an upward course again, after having reached a plateau last summer: 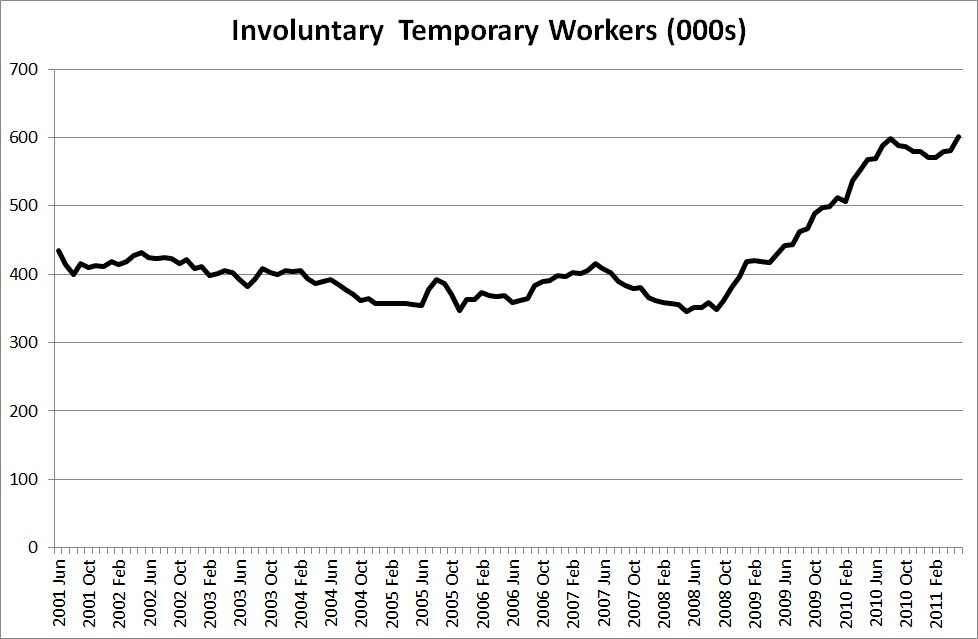 The number of involuntary part-time workers rose ten thousand to 1,264,000. Looking at the figures since 1992, the ten highest months are the last ten months, but this figure began rising well before the recession: 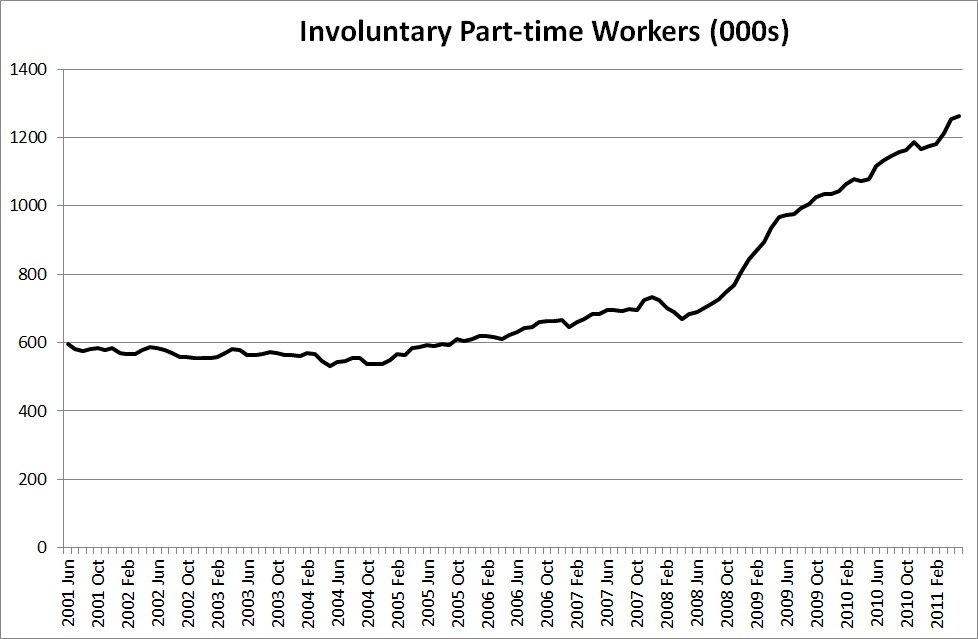 And finally, the vacancy figures continue to be very depressed. In the latest figures, the number of vacancies fell 9,000, to 459,000, two hundred thousand below the pre-recession level. This chart is the clearest picture of stagnation, not recovery: 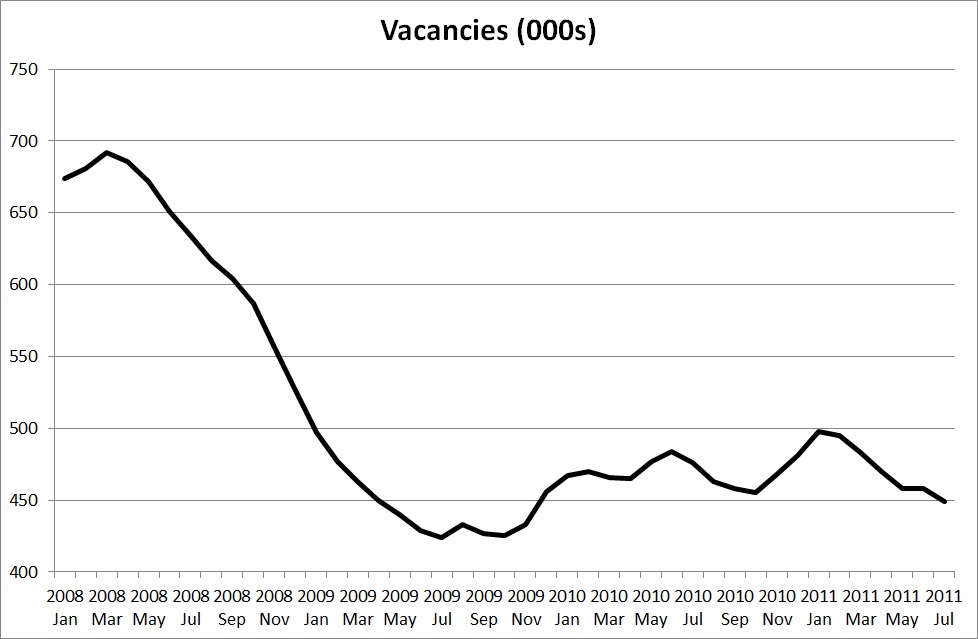 The number of unemployed people per job vacancy is still 5.4 – this figure has been over 5.0 for 27 consecutive months. Before the recession, this figure had never been over 3.0 since this series began in 2001.

The economy came out of recession in 2009, and there was the beginning of a labour market recovery but the reality for a year now has been stagnation. This makes my final chart seem all the more perverse.

This is the figure for the numbers on government supported training and employment programmes. This figure has been falling steadily since the election and the introduction of the Work Programme hasn’t improved things; indeed, since February, the decline has been precipitous: 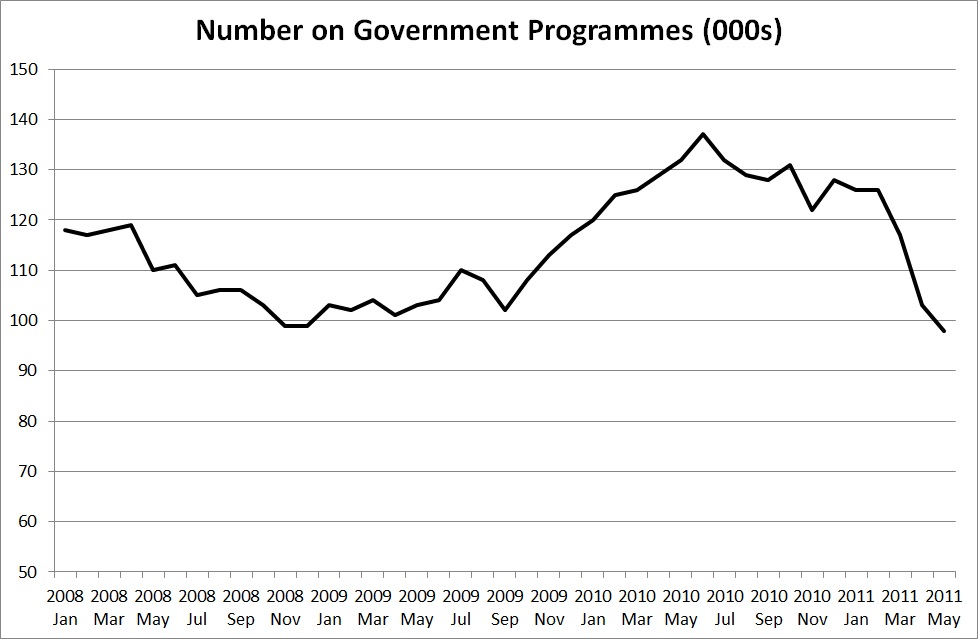 19 Responses to “The job market is stagnating across the board”