The Conservatives' dependence on the 'grey vote' and on their think tank apparatus may mean they are committed to ever increasing expenditures in future. 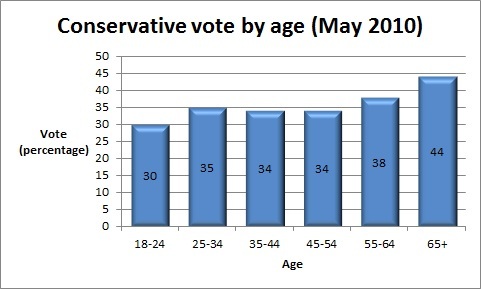 Obviously much of the focus today is rightly on the government’s efforts to fulfil one of its key obligations: the maintenance of law and order. However, it is worth noting the IFS report on the shape of future state spending and its implications for our society.

The short version is that we will be spending far more on services for old people. As the IFS says:

“[ Health, long term care and social security]  accounted for a third of all spending in 1978–79. They now account for half of spending… This dramatic increase in the share of health and social welfare  spending has been made possible by substantial reductions in the proportion of spending going to defence, housing, and support for business and industry…”

“Going forward, spending on health, pensions and long term care is set to rise fast. Just these elements of spending, excluding all the welfare benefits paid to non-pensioners, will reach half of all public spending over the next 50 years unless there is significant reform or unless total spending is significantly increased.”

“One consequence is that by 2014–15 spending on the NHS alone will account for nearly 30% of all public service spending.”

This is particularly pertinent for the Conservatives, due to their dependence on the ‘grey vote’:

Thus it should come as no surprise that, for example, spending in the NHS – mainly used by the old – is ringfenced by the coalition, but education is not, or that pensioners’ free bus passes are protected but Education Maintenance Allowances are not.

Not only are the Conservatives tied in electorally to big-spending departments whose budgets are only set to grow, but their policy-apparatus is as well.

Right-leaning think tanks such as Policy Exchange and Reform are often funded by those organisations that tender for public sector contracts.

Reform – where  David Cameron launched the open public services white paper – for example, has received sponsorship from General Healthcare Group, GE and KPMG, who all have an interest in public sector healthcare contracts, and other public sector tenderers such as G4S.

That may explain why Reform have a track record if backing co-payment – where services are paid for by users and subsidised by the taxpayer.

Unless the Conservatives can ‘rebalance’ their electoral appeal, or garner their policies from elsewhere, it is hard to see how they are not committed to ever increasing expenditures on services and payments aimed at older people in future.

13 Responses to “The future of the Conservative Party: Big-state Toryism”