The volatility of the markets is linked to the pursuit of high profit and air of invincibility enjoyed by banks. The Robin Hood Tax would help deal with these root causes 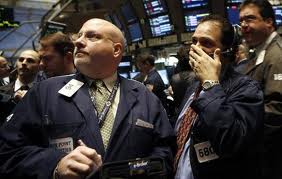 By Simon Chouffot of the Robin Hood Tax Campaign

Panic, plunge, turmoil and crisis featured on the front pages of the Mail, Financial Times, Guardian and Telegraph yesterday. The sovereign debt crisis, having been momentarily eased by agreement on Greece’s second bailout, is biting back, tearing shreds from stock market values.

Regardless of where on the doom-monger scale your predictions lie, the financial system is in peril, just three years since the last crisis. As Eurozone policy-makers (though not yet Cameron or Osborne  at time of writing)  cut short their holidays to plan collective action, whose interests will they be protecting?

What can we learn from our politician’s response last time? In 2008, as the largest economic crisis of a generation engulfed the world’s richest nations, a recapitalisation of major banks kept the financial sector alive. It was financed by the public purse and, at the cost of around £1trillion in the UK, led Governor of the Bank of England Mervyn King to paraphrase Churchill’s famous wartime quote: “Never in the field of financial endeavour has so much money been owed by so few to so many.”

“The real cost of this crisis is being borne by people who were absolutely not responsible for it.”

This is true both of the austerity measures announced by the Government to help bring down the deficit accrued through bailing out the banks and by the direct effect on our economy. The IMF has calculated that UK economic output worth £497 billion will be lost as a result of the systemic crisis.

Yet most of the financial sector’s profits have been protected from the ravages of the economic storm they created. Barclays profits for last year were up a third to £6.07bn, and HSBC doubled to £11.8 billion, whilst the rest of the economy struggled to report positive growth. Even as UK banks this week report below-par half-year results, owing to uncertainty in the market and the Payment Protection Insurance (PPI) fiasco, HSBC and Barclays both managed to beat expectations.

Two weeks ago the Office for National Statistics reported that City bonuses remain unchanged at £14 billion. As the Guardian highlighted, banks have anyway just negated the Government’s attempts to reduce bonus levels by increasing basic salary. They cited a report by recruitment firm Kennedy Associates “that an average investment bank managing director received £300,000 to £400,000 in base salary, as opposed to £175,000 four years ago at the peak of the market.”

Such profits and pay are only possible thanks to the taxpayer. Even for banks that were not directly bailed out with public money, their profits continue to benefit from an ‘implicit subsidy’. Credit rating agencies such as Standard & Poors know banks will not be allowed to fail thanks to the UK government [read taxpayer]. This means it’s a safe bet lending to banks, which improves their credit rating and makes borrowing that money cheaper.

“The average annual subsidy for the top five banks over these years [2007-2009] was over £50 billion — roughly equal to UK banks’ annual profits prior to the crisis.  At the height of the crisis, the subsidy was worth £100 billion.”

To ensure the financial sector contributes more, the government introduced the bank levy, which will eventually raise around £2.5 billion a year, yet corporation tax is being lowered to 23%, offsetting much of this. Meanwhile VAT has risen to 20%, which hits the poorest 10 per cent of the population twice as hard as the richest 10 per cent. Astonishingly, the financial sector remains VAT exempt.

Over the coming weeks as policy makers face the latest crisis, they must learn from these interventions and must not be held ransom to financial sector demands to protect their profits. Banks are somehow deemed to be under-performing if they are not surpassing the previous meteoric heights of pre-crisis profit. Yet it was the pursuit of such excess that led us into the crisis in the first place. Such profits should be viewed as a sign of an unhealthy economy where one sector is allowed to dominate, both economically and politically, to the detriment of others.

One policy option being discussed in Europe is the idea of a Financial Transaction Tax, known popularly in many countries as a ‘Robin Hood Tax’. A tiny tax would be levied on each stock, bond, derivative or currency transaction. It would target financial institutions’ ‘casino’ style trading that helped precipitate the economic crisis and is capable of raising hundreds of billions of euros a year. It could help support those who have been hardest hit by the financial crisis both in Europe and around the world.

France, Germany, Spain, Portugal and Belgium are among the countries to publicly support it.  Both the European Parliament and Commission are actively seeking its implementation. Nicolas Sarkozy has made it one of his priority issues for France’s Presidency of the G20. It’s increasingly viewed as the most robust and simple way to ensure that the financial pays a fair contribution for its part in the economic crisis. Over 40 have already been implemented around the world and concerns about the feasibility have been shown by the IMF, European Commission and others to be overblown.

As Europe moves ahead and grapples once again with the might of the financial sector, the UK Government should deliver on its claim that ‘we are all in this together’, support their efforts and prove that it is capable of bringing the financial sector back under control.

53 Responses to “Robin Hood Tax would lead to calmer markets”