New figures show that between March and June 486 nursing and midwifery posts were lost within the NHS in Scotland, along with 23 consultant posts. 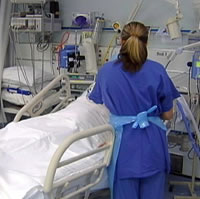 New figures have revealed that between March and June 486 nursing and midwifery posts were lost within the NHS in Scotland along with 23 consultant posts.

The information, contained within the NHS workforce statistics, also estimated that between March 2011 and March 2012:

• Overall reduction of NHS staff in post will be 2,390.5 whole time equivalents (WTE), an overall staff reduction of 1.8%;

• The largest estimated reduction is in Administrative Services, falling by 4.3%, including a reduction in management of 9.56%;

The news comes just a matter of months after Left foot Forward reported that the total headcount in the Scottish NHS fell between September 2010 and March 2011 by 1.2% with the number of Whole Time Equivalent Hospital, Community and Public Health Services (HCHS) medical and dental staff in the same period falling by 0.2%.

Commenting on the new figures, SNP health secretary Nicola Sturgeon admitted people would be concerned about the fall in nursing numbers:

“I am pleased to see good progress on the target to reduce senior managers which will contribute to more than £100m a year in non-clinical efficiency savings to be spent on frontline services. However, I appreciate that any reduction in the NHS workforce – particularly when it involves nurses, who are so vital to delivering quality care and service changes and who make up 40% of the total workforce – will cause concern.

“The fact is, though, that the NHS doesn’t stand still. The way that services are delivered is constantly changing. For example, over three quarters of all surgery is now done on a day case rather than an inpatient basis, and hospital stays are shorter than ever before. It is therefore inevitable that the size and shape of the NHS workforce will change to reflect this.

“Indeed, in times when resources are tight – notwithstanding the Scottish Government’s protection of the NHS budget – it is vital that changes to improve both quality for patients and efficiency for the public purse are speeded up.”

However, despite assurances from the minster that the drop in the number of nurses wouldn’t compromise patient safety, the Royal College of Nursing has warned that the figures are bad news for patients.

“Pressure on health boards to balance books and make more and more savings has resulted in them chipping away at the workforce to save money on pay. It is now time for health boards to look more carefully at savings that could be made in other areas, such as sharing clinical and backroom services.

“As advances in the way treatment is provided are made, some health boards are saving money by cutting beds and therefore the staff needed to run these beds. But as demand hasn’t disappeared, where are these services now being provided? Where is the evidence of an increase in community services and the nurses needed to provide them, for example?”

Picking up on the SNP’s clear pledge made by Nicola Sturgeon prior to May’s devolved elections to protect the NHS north of the border, Labour’s shadow Health secretary, Jackie Baillie, accused the SNP of “allowing our NHS to haemorrhage staff”.

“The SNP has cut the number of nurses to its lowest level since 2005 and even more nurses are set to lose their jobs next year. It is a disgrace that frontline nurses are being forced to bear the brunt of the SNP’s cuts. Nurses should be in our hospitals, and in our communities, not joining the dole queue.

“Scottish Labour wants to see resources going to support essential NHS staff doing a valuable job saving lives. The SNP need to stop kidding folk that they are protecting the NHS – cutting thousands of nurses will have a direct impact on our services and the quality of patient care.”