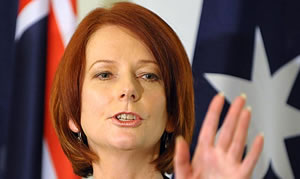 Australia’s Labor prime minister Julia Gillard suffered a further blow today with the High Court ruling the controversial Malysia asylum seeker “swap” deal illegal. The decision follows weeks of wrangling and comes amidst a sex scandal that threatens to sink the government and growing unpopularity at the new carbon tax that has seen increasingly vocal protests.

“Today the High Court held invalid the Minister for Immigration and Citizenship’s declaration of Malaysia as a country to which asylum seekers who entered Australia at Christmas Island can be taken for processing of their asylum claims.

“After an expedited hearing before the Full Bench, the Court by majority made permanent the injunctions that had been granted earlier and restrained the Minister from taking to Malaysia two asylum seekers who arrived at Christmas Island, as part of a larger group, less than four weeks ago.

“The Court also decided that an unaccompanied asylum seeker who is under 18 years of age may not lawfully be taken from Australia without the Minister’s written consent under the Immigration (Guardianship of Children) Act 1946 (Cth).”

The Court further ruled the Commonwealth government cannot send asylum seekers for processing to third countries unless those states are:

Legally bound by international law or its own domestic law to:

• Provide access for asylum seekers to effective procedures for assessing their need for protection;

• Provide protection for asylum seekers pending determination of their refugee status; and

• Provide protection for persons given refugee status pending their voluntary return to their country of origin or their resettlement in another country.

In addition to these criteria, the Migration Act requires that the country meet certain human rights standards in providing that protection.

Of the wider picture, and the reputational damage being done to Gillard’s government, chief politial correspondent of the Sydney Morning Herald, Philip Coorey, writes:

“The High Court decision on the Malaysia refugee swap is another blow to a government that can least afford it. This government cannot take a trick. Up until this morning, legal experts and even the opposition were confident that the High Court would never rule against the government. That would be too interventionist, was the sentiment…

“But no. As the government wallows from misfortune to misery, the High Court has ruled 6-1 against the Malaysia solution. It has also cast doubt over the legality of Nauru, the opposition’s preferred option, and even Manus Island, the government’s plan B. This is the most interventionist decision by the Court in three decades.

“For Julia Gillard, the High Court’s ruling on the Malaysian refugee swap will be a major political blow. While the full implications are still being considered, this is first and foremost a defeat for the government when it could least afford it. It has been battered for two weeks over the Craig Thomson affair, its primary vote is mired below 30 per cent and now there’s nothing to stop the arrival of boats becoming a flood…

“It can be argued that the separation of powers means the government cannot be blamed for a High Court decision. But questions will be asked whether it war-gamed thoroughly a legal challenge before formulating the deal with a country that was not a signatory to the United Nations High Commission for Refugees convention. Did it do its homework? ”No” will be the answer from the opposition.”

The Thompson scandal is unfortunate, and ultimately not down to Gillard; the unpopularity is to be expected, and the leadership she has shown over climate change to be commended – with a carbon tax more effective than Europe’s; but the row over asylum, and the humiliating defeat in the High Court, is entirely self-inflicted, a policy with support neither from Left or Right, rightly condemned and thrown out by the bench, a policy which could be the last straw for her government.