The IMF has just published its latest assessment of the UK economy. In line with other forecasters, it has had to reduce its forecast for GDP growth in 2011 (though at 1.5% its estimate is relatively optimistic).

Nonetheless, it remains supportive of the government’s deficit-reduction plan. However, there is a warning that there are substantial risks to the outlook and the assessment says:

“mounting evidence that weak demand is likely to cause the economy to stall and enter a period of prolonged low growth would call for looser macroeconomic policies”.

How the IMF define ‘prolonged’ is unclear, but it is now crystal clear that weak demand over the last three quarters has brought growth in the economy almost to a standstill and – if business confidence indicators are to be believed – the current quarter will be little better. Clamour for a change of policy – either to temporarily cut taxes or to increase the scale of quantitative easing – is likely to grow.

Overall, the UK economy is experiencing a mild form of ‘stagflation’. Real GDP increased by just 0.2% in the second quarter of 2011 and has barely increased at all over the last three quarters, while inflation remains above 4%. And in the short-term things could get worse. Confidence in manufacturing has dropped sharply in recent months as a result of falling orders; and higher prices for domestic fuel are likely to push inflation up to 5% in the autumn.

Many of the UK’s problems are external in their origin. The sovereign debt crisis in Europe has worsened, with Greece appearing to be on the brink of default and bond yields up sharply in Spain and Italy (where they are at their highest level since the euro was introduced), as well as political brinkmanship delaying a deal on the US deficit and debt until the very last minute. As a result, business confidence across developed economies has fallen. This will be hitting external demand for UK output.

Meanwhile, commodity prices have been boosted by the strength of economic activity in emerging economies, and this has led to large increases in food and energy prices in the UK. As a result, consumer price inflation is well above its target level. It has also squeezed households’ spending power, so leading to weaker domestic demand.

But government policy is also to blame. The increase in VAT in January was badly timed – adding to external inflation pressures. Meanwhile the scale of the cuts in public spending announced last September and the government’s austerity rhetoric more generally have contributed to a decline in consumer and business confidence.

1. GDP increased by 0.2% in the second quarter: Real GDP increased by just 0.2% in the second quarter of 2011 and it is up only 0.7% over the last year. Service sector output increased by 0.5% in the latest quarter, but production was down 1.4%. There were some special factors – the Japanese tsunami, the extra bank holiday for the royal wedding – which could have taken up to 0.5% off growth (but we will not know for sure until the third quarter’s figures are released).

Even so, it is clear that growth is turning out lower than most forecasters, including the Office for Budget Responsibility (OBR) expected. Mathematically, it will now be very difficult for growth to exceed 1.5% in 2011 – a disappointing rebound from the deepest recession in the UK since the 1930s. 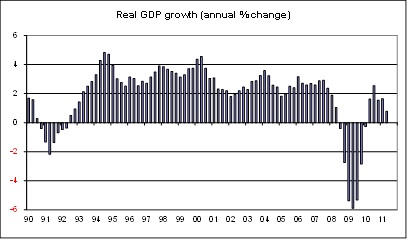 2. Retail sales volumes are flat: The volume of retail sales was up 0.7% in June. But this followed a decline of 1.3% in May. The latest annual rate of increase is just 0.4%. Furthermore, after allowing for monthly fluctuations, it is fair to say that sales have been flat over the last year. However, sales values increased by 4.0% over the same period. This suggests consumers are willing to increase their spending in nominal terms, but higher inflation means they are getting little extra in real, or volume terms for their money. 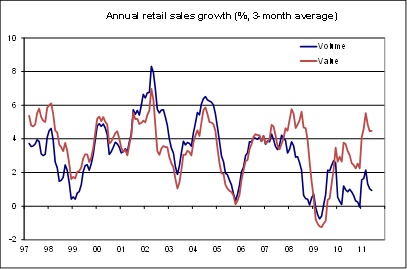 4. Business confidence falls again: The latest purchasing managers’ index (PMI) for manufacturing was 49.1 in July – below the critical 50 level. This suggests manufacturing output is contracting for the first time in two years. The employment sub-indicator was also below 50 suggesting employers are cutting their workforces for the first time since March 2010. Weakening domestic demand is the main problem, but export orders are also growing less rapidly as the turmoil in euro zone bond markets takes its toll. However, confidence remains higher in the service sector, suggesting the overall outlook is for some growth in coming months.

5. Manufacturing output is expanding at a slower pace: Manufacturing output increased by 1.8% in May, though this was largely a rebound from the 1.6% fall in April that was caused by two special factors: the extra bank holiday on the day of the royal wedding and the Japanese tsunami, which disrupted global supply chains. The annual rate of increase – taking the latest three months and comparing with the same three months a year earlier – is now 2.1%. This is the lowest annual increase since March 2010, suggesting the underlying trend rate of growth has slowed. 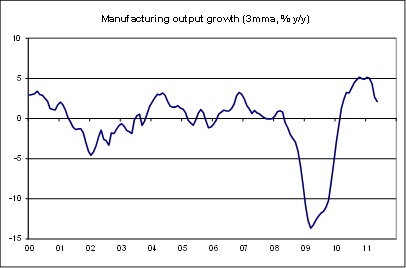 6. Employment increasing: Employment remains the bright spot in the economy. It increased by 50,000 over the three months to March-May 2011 and by 309,000 over the last year. Over half the jobs lost in the recession have been recovered. Employment has been much higher throughout the recession and recovery than would have been expected from past experience. In part, this is due to increased part-time working and there are now a record 1.25 million people working part-time because they cannot find a full-time job.

7. Unemployment declining (or not): The Labour Force Survey (LFS) shows a 26,000 decrease in unemployment between December-February and March-May. The total number looking for work is now 2.45 million. However, the claimant count measure increased by 24,500 in June – the fourth consecutive monthly increase. There are now more women claiming Jobseekers’ Allowance than at any time since August 1996. The recent increases have been attributed to changes in benefits rules, but detailed data show they are largely the result of decreased outflows from JSA, suggesting demand for workers has dropped.

8. Price inflation unexpectedly lower: Consumer price inflation was 4.2% in June, down from 4.5% in May (and retail price inflation was 5.0% from 5.2%). There is some evidence of discounting of electronic goods in response to weak consumer demand. Increases in domestic fuel prices – already announced – mean inflation will increase in the next few months – probably peaking at more than 5% in the autumn.

9. Wages fail to keep up with prices: Average earnings – both total pay and regular pay – are increasing at an annual rate well below the rate of price inflation. This is squeezing households’ spending power – the worst such squeeze since the 1920s. Over the last year, regular pay is up 2.1% and total pay 2.3%.

10.  Government borrowing not falling as forecast: Public sector net borrowing (excluding financial interventions) was £14.0 billion in June 2011, compared to £13.6 billion in June 2010. After the first three months of the 2011/12 fiscal year, borrowing has totalled £39.2 billion, compared to £39.5 billion in 2010/11. Even allowing for the one-off £3.5 billion of tax revenues received in April 2010 from the Bank Payroll Tax, borrowing does not look to be on course to hit the £122 billion forecast by the OBR in March.

12.  Government bond yields lower: The 10-year UK government bond yield fell to close to its record low in July and ended the month just above 3%. Investors have probably been moving money into UK bonds as a result of the continued uncertainty in Europe and the US, and in the belief that weak economic data mean interest rates will not be increased any time soon.

13.  Sterling stronger: Sterling’s value against a basket of overseas currencies rose by over 2% in July, reversing its fall in June. It was up against both the US Dollar and the Euro.