A new poll shows that just 25% of voters support the abolition of the 50p tax rate. Danny Alexander is on the right side of the argument. 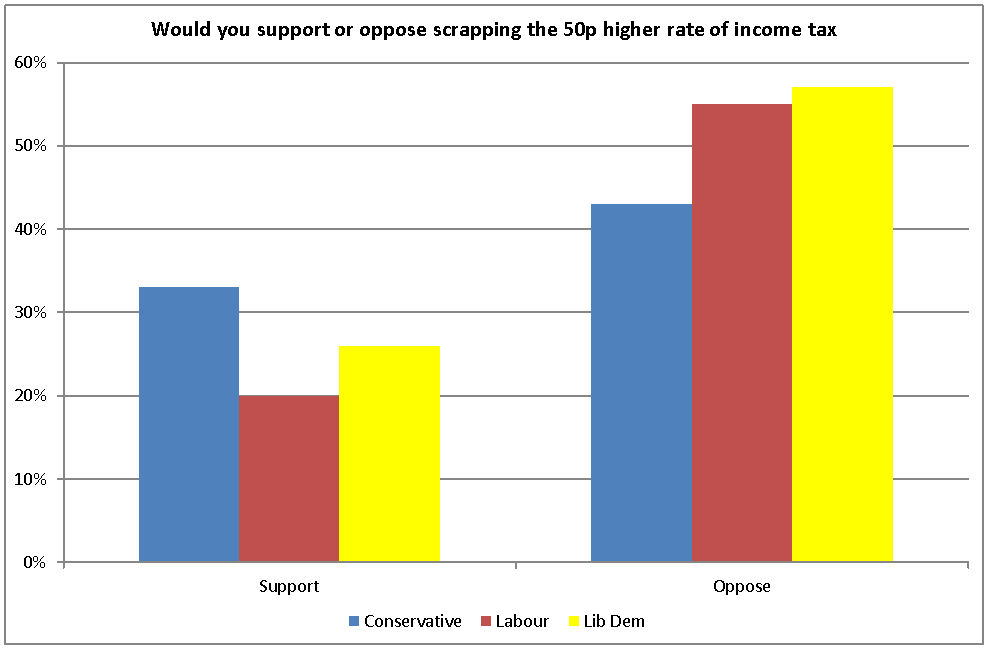 A new poll shows that just 25 per cent of voters – including only a third of Tory voters – would support the abolition of the 50p tax rate. The findings suggest that Chief Secretary to the Treasury, Danny Alexander, is on the right side of the debate in dismissing his Tory colleagues as living in “cloud cuckoo land“.

The YouGov poll for the Sunday Times found that just 25 per cent of voters supported a policy to scrap the 50p higher rate of income tax. Even fewer voters – just 21 per cent – thought that the policy would boost growth. As the graph below shows clear majorities of supporters for all major political parties oppose the move.

In recent weeks, senior Tory politicians have called for the policy – introduced by Alistair Darling – to be scrapped. Last week London mayor, Boris Johnson, said that abolition of the 50p rate would be “a signal that London is open for business … That’s the right direction to be going in“. Former Conservative chancellor, Lord Lamont, used an article in the Sunday Telegraph to write:

“Lower taxes are important. Our taxes are uncompetitive and too high compared with other European countries. The fifty per cent higher rate of income tax is probably one tax which could be abolished without any effect on revenue.”

Last week the Financial Times reported that Mark Field, Tory MP for the Cities of London and Westminster, had urged the Chancellor to “look at a big iconic move” such as scrapping the 50p top rate of tax, accompanied by an acceleration of the plan to take the lowest paid out of the tax system. Meanwhile a host of commentators including Spectator Editor, Fraser Nelson, have called for George Osborne to scrap the tax.

The Treasury appears to be split on the issue with George Osborne reported to be in favour of scrapping the tax by 2013 while Danny Alexander said yesterday that those who supported the right-wing policy were living in “cloud cuckoo land“.