The latest Office for National Statistics (ONS) data indicates youth unemployment continues to be a cause for concern, writes the TUC's Richard Exell. 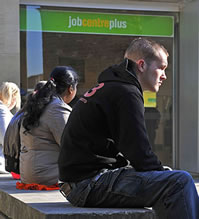 A report (pdf) on “Explaining the relationship between unemployment rates and inactivity in young people” published today by the Office for National Statistics suggests that the unemployment rate may overstate the problem.

There’s always been a worry that using the unemployment rate to measure youth unemployment is problematic, mainly because of the rising number of young people staying on in full-time education:

• So the youth unemployment rate would tend to go up – even if the number of unemployed young people remained the same it would be divided by a smaller number.

This would be a worry about using the unemployment rate in discussions about what was happening to any group that was shifting to (or from) economic inactivity. These days it’s young people who are most affected.

Unfortunately, we can’t really use the unemployment level (the number unemployed) instead, because the overall number of young people has been shifting over the past twenty years:

A hundred thousand unemployed young people in 1999 obviously means something different from the same number today. ONS deal with this by looking at the “unemployed proportion” – the proportion of the total number of young people who are unemployed.

The interesting result is that the increase in youth unemployment during the recession was significantly less sharp when measured this way:

If we concentrate on the unemployment rate, the current figures are clearly worse than in the early 90s, whereas the unemployed proportion results in a level that is much the same.

Does this mean that we shouldn’t take youth unemployment so seriously?

No. For one thing, even when we measure unemployed proportions instead of unemployment rates, young people have still been especially hard hit since the start of the recession:

In any case, the most important reason to be concerned about youth unemployment isn’t really its size. We know (pdf) that youth unemployment, especially if it is long-term, is especially bad for physical and psychological health, that having been unemployed in youth harms people’s earnings even decades later and that it has huge social costs such as higher crime rates.

Any increase in youth unemployment, however measured, is a cause for concern.

8 Responses to “Youth unemployment is still a cause for concern”