Rupert Murdoch has turned down an invitation to answer questions from Members of Parliament; here's the video of the kind of slavish Fox News interview he prefers. 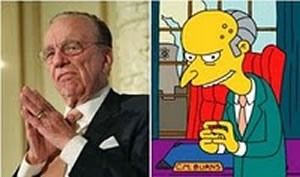 Rebekah Brooks may have finally agreed to submit to the will of our elected representatives, but the Murdochs are far less eager to co-operate with Parliament’s inquries.

Rupert Murdoch’s refusal to attend what will no doubt be a rigorous examination makes this the perfect opportunity to revisit this gem from the Fox network.

Appearing on Stuart Varney’s show back in July 2009 when rumours linking Andy Coulson to phone hacking were just beginning to surface, Murdoch was perhaps surprised to be asked so directly about the allegations by one of his employees.

However, in one of the more brazen acts ever attempted by an interviewee, he cut his host off mid flow before he could finish the question. Rather than push the issue further, Varney backed down, showing the kind of deference politicians dream of.

Watch it in all its glory:

And here’s the transcript of the sycophancy:

Stuart Varney: “The story that is really buzzing all around the country and certainly here in New York is that the News of the World, a News Corporation Newspaper in Britain, used…”

Rupert Murdoch: “I’m not talking about that issue at all today, I’m sorry.”

Varney: “Okay. No worries, Mister Chairman that’s fine with me!”

Murdoch: “I’m too far removed out of here.”

Let’s hope that when he finally appears before the select committee his Parliamentary interviewers are less sympathetic to his desires than his “yes sir, no sir, three bags full sir” servants at Fox News were.

33 Responses to “VIDEO: The kind of slavish interview the gutless Murdoch prefers”