There are reports this morning that the Conservative party used private investigators, like Glen Mulcaire, to delve into the personal lives of their own supporters. 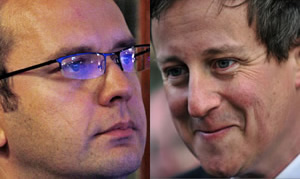 There are reports this morning that the Conservative party used private investigators, like the infamous phone hacking PI Glen Mulcaire, to delve into the personal lives of their own supporters.

They used a private investigation firm to delve into the personal lives of those sounded out for the “I have never voted Conservative before but…” campaign. At least three people were later rejected.

One was reportedly turned down because he had had an affair and another because of links to a ­controversial political movement.

The Tories claim the checks were legally done by a “reputable” firm and “with the full ­knowledge and consent of the person involved”. But one of them told the Mirror she was “astonished” that the party “knew everything” about her.

This latest story comes amidst the re-emergence onto the front pages of the News International phone hacking scandal, following the news yesterday that Sara Payne, mother of murdered schoolgirl Sarah Payne, may have had her phone hacked.

The phone in question was given to her by the News of the World, further ratcheting up the pressure on disgraced former-NotW editor Rebekah Brooks, who had wormed her way into Sara’s life and told her she was her friend, even getting her to write a glowing article about the rag in the final edition of the tabloid.

Elsewhere, the culture, media and sport select committee are meeting this morning to decide on whether to recall James Murdoch after his evidence to the committee was disputed, in particular his “I knew noooooothing” charade about the £700,000 and £1 million hush money payoffs to phone hack victims Gordon Taylor and Max Clifford.