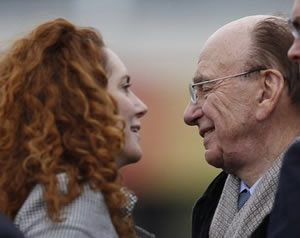 As his British business faces unprecedented difficulties, with advertisers deserting by the hour, police investigations looming and his most senior official, Rebekah Brooks, on the rack, the mounting fallout of  the phone hacking scandal has this afternoon seen Rupert Murdoch himself enter the fray.

In a statement released this afternoon Murdoch, chairman of News of the World (NotW) owners News Corporation, says:

“I have made clear that our company must fully and proactively co-operate with the police in all investigations and that is exactly what News International has been doing and will continue to do under Rebekah Brooks’s leadership.

“We are committed to addressing these issues fully and have taken a number of important steps to prevent them from happening again.”

So after days of silence, Mr Murdoch has finally been dragged to respond. In so doing he damns Brooks with faint praise.

But the key questions facing Rebekah Brooks and Andy Coulson – what they knew and sanctioned while they ran the NotW – surely extends to Murdoch as proprietor? Difficult questions. No wonder he has full confidence in Rebekah Brooks’s “leadership” in fronting the fallout…

Back in 2008, Murdoch was not so coy about his hands-on role in the management of his newspapers. As the first report from the House of Lords Select Committee on Communications found in 2008 when it inquired into media ownership:

“When we met Mr Murdoch he was quite candid about the fact that, at least in relation to his UK tabloids, he has “editorial control on major issues”.”(Ch.3, Par 123)

Words from the Great Man’s own lips.

Does “editorial control on major issues” extend to knowing about how some of the paper’s biggest scoops were arrived at – by hacking into people’s voicemail? Did he ever sanction the practice? Or discuss it with the NotW editorial team?

By leaving this mess for Brooks to front up, it seems Mr Murdoch, in the inimitable style of the Screws’ reporters, appears to have made his excuses and left her to it.