Statistics out today show the NHS and public sector pensions are entirely affordable, contrary to what George Osborne and the Conservatives are spinning. 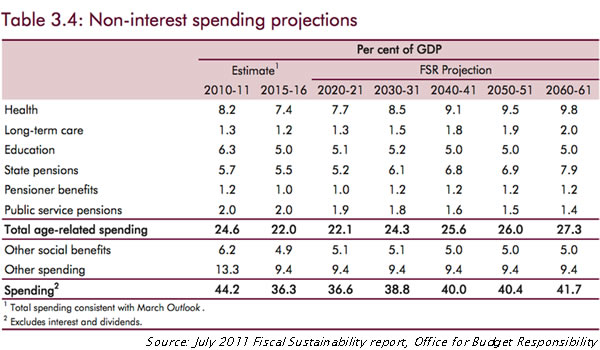 Today there has been a blizzard of reports on the future of public finances, from the Office for Budget Responsibility (OBR), the Treasury (the Whole of Government Accounts, pdf), and the Institute of Economic Affairs (Sharper Axes, Lower Taxes, pdf). In the firing line are public pensions and the NHS.

The OBR’s July 2011 Fiscal Sustainability report (pdf) looks long into the future (2060) and guesses at the likely proportions of GDP that might arise as the population becomes more elderly. The assumptions are based on current policies, not government proposals. Confirming earlier findings in the Hutton Report (pdf), they clearly predict the cost of public pensions will fall from 2% of GDP to 1.8% in 2030 and 1.4% in 2060 – without any of the current Hutton proposals.

The other major factors increasing are health and long-term care, which taken together increase from about 9.5% to 10% in 2030 and 11.8% in 2060. The British Medical Journal puts this into context today in an article from John Appleby, chief economist of the King’s Fund.

Perhaps unwisely given the far more modest predictions from the OBR shown above, Appleby accepts at face value the verdict of health secretary Andrew Lansley that:

“If things carry on unchanged, this would mean real terms health spending more than doubling to £230 billion… This is something we simply cannot afford.”

And yet even in this worst case scenario this would bring us to only just exceed the OECD average and fall far shy of health and long term care spending in the US. 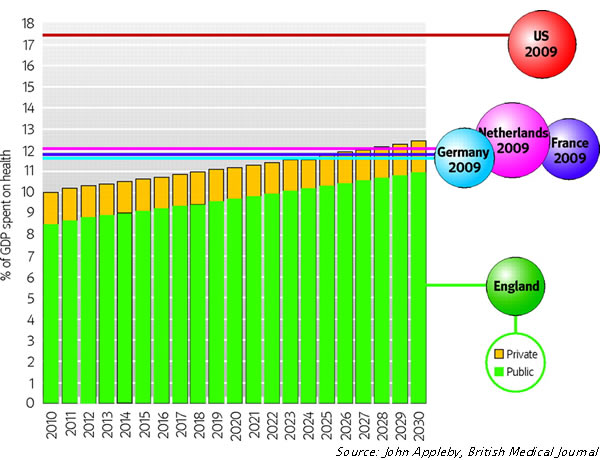 Or rather it would if the OECD and US didn’t have an aging population that is likely to push up their health costs too. So apparently we simply can afford to carry on with the current NHS arrangements… if we choose to.

Elsewhere, the BBC headlines the OBR report with ‘Public sector pension liabilities top £1 trillion’, noting this is £332 billion higher than the year before.  A bit further down they notice that the OBR states  this “has nothing to do with changes in the size of prospective pension payments” – remember they will fall from 2% to 1.8% in 2030 – but is because the government has just changed the assumptions.

And in perfectly circular reasoning the right is now trumpeting the OBR report as supporting their changes.

Hopefully Evan Davis or some other even moderately numerate journalists will notice this perfidy and hold the government to account.