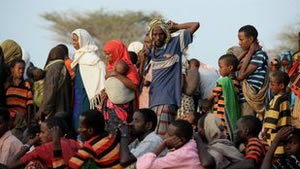 David Taylor is the chair of the Labour Campaign for International Development (LCID, @LabourCID)

More than 12 million people in east Africa are facing desperate food shortages following the worst drought in 60 years. Rains have failed for successive seasons, and families across Somalia, Ethiopia and Kenya are struggling to find anything to eat or drink. Hundreds of thousands of livestock have already died. Food prices have rocketed.

“This is the worst food crisis of the 21st century and we are seriously concerned that large numbers of lives could soon be lost.

“People have already lost virtually everything and the crisis is only going to get worse over the coming months – we need funds to help us reach people with life-saving food and water.”

The crisis is not just concerning Ethiopia, but spreads across the Horn of Africa, including Somalia. The World Food Programme recently called for action in Somalia, where 2.4 million people – one third of the population – are estimated to be in need of various kinds of humanitarian assistance.

In Somalia, 16 per cent of all children under five, 241,000 children are acutely malnourished.

In 2011, the World Food Programme aimed to feed 1.2 million people in Mogadishu, and in central and northern Somalia. In the first quarter of 2011, the WFP delivered assistance to about 1 million people there. But a shortfall in donations means in May has left them 66 per cent short of their target, giving them only 33 per cent of what they should be giving out.

In addition, since January 2010 they have been unable to deliver food to much of southern Somalia because of growing insecurity and threats and unacceptable demands from Al-Shabaab.

The Department for International Development have said supplementary food will also be provided for 329,000 malnourished children and pregnant and breastfeeding mothers, and that the government is supporting eight million people with food, livestock and basic support through the Productive Safety Net Programme.

Mr Mitchell has done right the thing but can show greater leadership by putting in the necessary hard graft to push other rich countries into following suit and coughing up the cash needed.

“Across the Horn of Africa millions of people are suffering from a severe drought caused by lack of rain and rising food prices. Mothers are forced to see their children going hungry and thirsty, families have lost their incomes and are being forced to flee into refugee camps. The conflict and turmoil in Somalia is making the situation even worse.

“To avert famine and to save lives we must step up international action. Governments and donors must provide the necessary funds. As the United Nations Office for the Coordination of Humanitarian Affairs, led by Valerie Amos, has underlined, humanitarian agencies can do more if they have the resources they need.

“I welcome the Aid that the UK Government has announced for Ethiopia. We want to hear from the Government what more they are doing to help Kenya, Somalia and Djibouti.

“As well as immediate action, the international community must tackle the effects of speculation on food which causes prices to soar and hits people in the developing world hard. And we must increase efforts to fight climate change to stop even greater drought and famine in the years ahead.”

• Please donate to the appeal via Oxfam here.