The headline employment and unemployment figures may be about to take a turn for the worse, writes Richard Exell, Senior Policy Officer at the TUC. 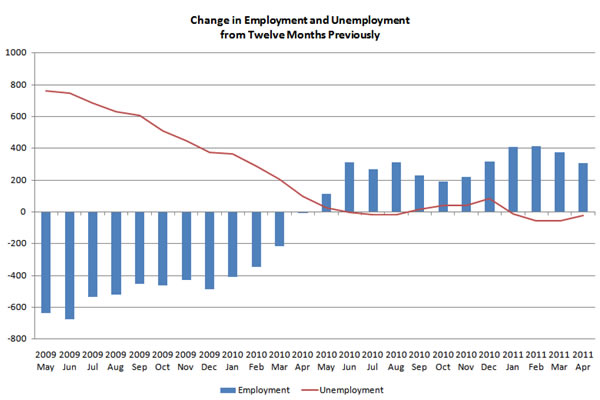 The headlines in today’s labour market statistics (pdf) will satisfy the government. Employment in the three months March to May reached 29,279,000, an increase of 50,000 from December to February. The number unemployed (using the ILO definition) fell 26,000 to 2,452,000 between the same dates.

This perspective allows us to see that employment is doing well but the story is less encouraging when it comes to unemployment, which has been falling throughout 2011 but not very quickly.

And even the headlines may be about to take a turn for the worse. Indeed, the theme music for this month’s figures could have been written by Noel Coward; ‘There are bad times just around the corner, there are dark clouds hurtling through the sky…’

The first prompt for this dejection comes from the unemployment headline itself. If we compare March to May with December to February, it is true that unemployment has come down, but if we compare this month’s figure with last month’s – that is, the figures for February to April – there has been an increase of 22,000.

Now, using rolling averages in this way can be misleading, so it wouldn’t be reasonable to take fright just at this, but there are other straws in the wind.

One is the claimant count measure, based on the numbers claiming Jobseeker’s Allowance. The latest figures are for June; that is, they are a month ahead of the ILO definition figures, and they show an increase of 24,500. As Table 1 below show, this is the biggest increase since May 2009, and it has been rising for four months.

One reason for the rise in the claimant count is that people who used to receive other benefits are being moved over to Jobseeker’s Allowance. People still receiving Incapacity Benefit are being moved to Employment and Support Allowance, which involves a far tougher test and many of those who fail it claim JSA instead.

Even larger numbers result from lone parents; since October, lone parents whose youngest child is aged seven or over have ceased to be eligible for Income Support and have had no alternative but to sign on for Jobseeker’s Allowance. Department for Work and Pensions (DWP) figures are available up to May, and they suggest lone parents may account for half the increase in the claimant count.

In previous months, therefore, it hasn’t been reasonable to question where the ILO unemployment statistic is headed on the basis of the claimant count. But, as Graph 2 below shows, the new DWP figures suggest the number of lone parents coming on to the count is slowing down. 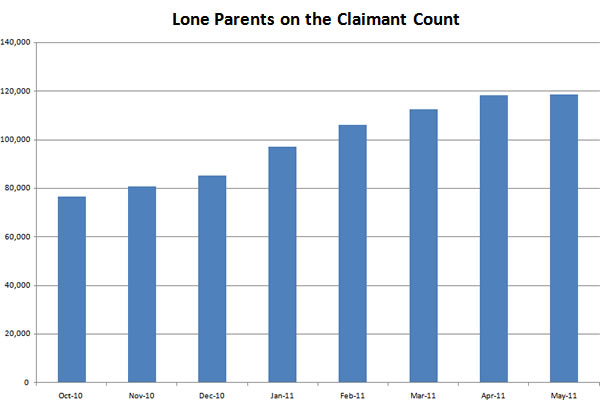 If that picture continued into June, benefit rules are a less likely explanation for the increase in the numbers on Jobseeker’s Allowance.

The final signal is the vacancy level, down from 495,000 in December to February to 457,000 in March to May. There are provisional figures for a slight increase (to 458,000) in April to June, but it remains the case that there have been fewer than half a million vacancies since January 2009; pre-recession, the norm was well over 600,000.

In December to February, there were 5.0 unemployed people for each vacancy – bad enough – but in March to May this jumped to 5.4.

One way of summarising today’s numbers would be to say that the main employment figures have looked good in most months this year. But whereas in previous months the negative points have been secondary to this overall picture, today the danger signs are at least as important.

3 Responses to “Are the employment figures about to get worse?”