James Murdoch faces a maximum sentence of being "committed to prison during the life of the Parliament" if he is found to have misled the media select committee. 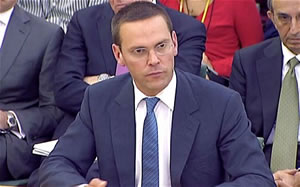 James Murdoch faces a maximum sentence of being “committed to prison during the life of the Parliament” if he is found to have misled the culture, media and sport select committee. Murdoch has effectively been accused of lying by former News of the World editor Colin Myler and ex-NotW lawyer Tom Crone, who claim he was fully aware of the hush money payout to phone hack victim Gordon Taylor.

In 2008, the Professional Football Association chief executive received a £700,000 out of court settlement to buy his silence in an attempt to bury the extent of the phone hacking scandal.

Myler and Crone now say that, in his evidence to the select committee:

“James Murdoch’s recollection of what he was told when agreeing to settle the Gordon Taylor litigation was mistaken.”

The claims echo those made by Myler exactly two years ago, in evidence to the same committee. Myler said Crone, who also gave evidence in July 2009, advised him after taking legal advice that News International should settle the Taylor phone hacking case.

“James Murdoch was apprised of the situation and agreed with our recommendation to settle… It was an agreed collective decision.”

As Murdoch was not under oath, he cannot be tried for perjury; however, the “Guide for witnesses giving written or oral evidence to a House of Commons select committee” (pdf) does state:

“The protection which absolute privilege gives to those preparing written evidence and to witnesses must not be abused. In particular, witnesses should answer questions put to them by a committee carefully, fully and honestly. Deliberately attempting to mislead a committee is a contempt of the House, which the House has the power to punish.”

“The House of Commons has emphasised the obligations on witnesses to be honest and open in the evidence which they give to committees.

“Knowingly to mislead a Committee is a contempt of the House. If you have become aware that you need to make corrections of any matters of fact or interpretation to ensure that the final record of what you said to the Committee is accurate and complete, you should submit a separate note which will be appended to the evidence either as a footnote or as a freestanding memorandum…

“The final decision on the admissibility of any proposed amendments rests with the Committee. Although the evidence was taken in public, you should not make any public reference to this transcript without indicating clearly that it is an uncorrected document, and that the final form of its publication has not yet been approved by the Committee.”

Committee chair John Whittingdale has asked Murdoch to respond to Myler and Crone’s allegations, and “clairify” his position – though he is standing firm, News Corp releasing a statement insisting:

“James Murdoch stands by his testimony to the select committee.”

As the BBC reports:

“Examples of contempt include giving false evidence to a parliamentary committee, threatening a Member of Parliament, forging documents and attempting to bribe members. The Commons has the power to order anyone who has committed a contempt of Parliament to appear at the Bar of the House and to punish the offender.”

With the maximum punishment, as stated at the top, being jail for the lifetime of the Parliament. The last stranger to be called to the Bar was the late Sir John Junor, former editor-in-chief of the Sunday Express, in 1957.