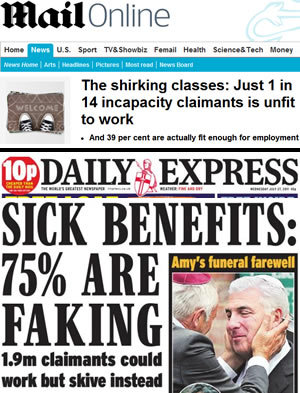 The Coalition’s efforts to hang out the disabled to dry are going splendidly. “The shirking classes: Just 1 in 14 incapacity claimants is unfit to work,” thunders the Daily Mail. “Sick benefits: 75% are faking,” slams the Express. The Telegraph similarly spins: “Only 7pc of sickness welfare claimants are signed off work.”

These headlines have been dutifully generated from ministerial annoucements. The DWP gives the hacks an inch, couching thier announcement in terms of how many people have been ‘found out’.

And then the newspapers take a mile, with articles slamming scroungers, topped off with a nice quotation from the TaxPayers’ Alliance:

“Sadly there are those who see being ‘on the sick’ as an easy option.”

The first thing to point out is that the articles confuse applicants ( to which these statistics refer) and pre-existing claimants ( that the newspapers seek to slam). Furthermore, Richard Exell over at the TUC has got down among the data, to show that the 75 per cent figure is pure spin.

Let’s have a look at what today’s statistics actually show.

When people applying for EMA [Employment Support Allowance] were tested these were the results:

• 7% were placed in the Support Group (people who are expected to be on the benefit for a long time);

• 17% in the Work Related Activity Group (people who are expected to be able to work one day, but not now);

• 36% closed their claim before their assessment was complete.

Richard touches upon the Work Capability Assesment that decides which of the four categories you fit in with. This is carried out with a more profitable arm of David Cameron’s Big Society, IT company Atos. While four in ten appeals are successful, this figure is as high as 70 per cent in Scotland.

Atos is accused of carrying out the tests in a rushed, cursory and innappropriate manner, for example testing those for flexibility whose conditions mean thier joints dislocate easily, or can only sustain jobs for a few weeks at a time before breaking down.

Many Atos centres do not even have appropriate facilities to carry out the tests, and surveys indicate that the actions of the Atos regime have the effect of pushing the disabled towards suicide. Given that up to 95 per cent of disabled people think that ‘they will not be believed’ by Atos, it is no suprise that so many pull out of the tests.

Furthermore,  this drive occurs as the Access to Work (AtW) programme that supports disabled people in employment is shrinking, with 1,400 fewer individuals being assisted on the scheme in the last year, after the government restricted larger employers such as the Royal Mail from accessing the AtW.

The government is still depending on an Atos to carry out these tests, and to generate statistics that tabloids use to conjure headlines that browbeat the disabled. This is at a time when the disabled are facing mounting abuse and violence. As reported previously on Left Foot Forward, a recent survey for charity Scope  in the capital found that:

“Half of London respondents to the poll said they experienced discrimination on a daily or weekly basis. It also found that 63% of people with disabilities in London thought others did not believe they were disabled.”

It is time the government show some leadership, stand up to Atos, and stop pandering to the mob mentality of the the press.