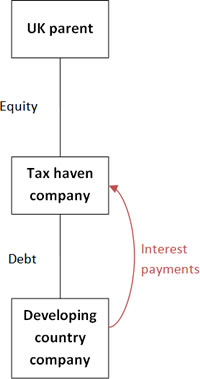 Martin Hearson is a tax policy adviser at ActionAid UK

In an era of fiscal retrenchment, we all want our government to be tough on tax dodging, whether by businesses or rich individuals. The government understands that, which is why George Osborne’s budget included a £1 billion crackdown on tax avoidance. Yet, as documents released as part of a consultation yesterday confirm, the Treasury is proposing changes to some obscure corporate tax rules that will cost the Treasury almost as much – £840 million a year by 2015.

ActionAid UK is concerned these changes could hurt developing countries much more, to the tune of as much as £4 billion. And we’re not alone. A former HMRC official who worked on taxing multinationals thinks these changes:

“…would give UK multinationals carte blanche to siphon profits from developing countries into the world’s tax avoidance hotspots.”

The government plans to relax a set of anti-tax haven abuse legislation known as Controlled Foreign Company (CFC) rules. The current rules force UK companies to pay full UK tax on many of their subsidiaries that are based in tax havens, where they would otherwise incur much lower tax rates. This deters multinational companies from shifting profits into these tax haven subsidiaries to avoid taxes.

Here’s how one of the proposed changes will work. Most multinational groups have finance companies, usually based in tax havens, whose function is to lend money to other group companies. The proposed change will mean that the UK’s CFC rules no longer apply to these companies.

This will allow companies to use a piece of tax avoidance called ‘thin capitalisation’: a huge loan is made from a tax haven finance company to a developing country company, and the interest payments that follow shift taxable profits out of the developing country and into the tax haven.

The government’s proposed reforms will make this a much more attractive tax dodge for UK multinationals, by lowering the tax bill levied by the UK on finance companies’ profits.

According to the consultation document (pdf) itself:

“…in most situations [the new exemption] will result in an effective UK corporation tax rate of 5.75 per cent.”

Developing countries, whose revenue authorities are less well-equipped to prevent tax dodges like thin capitalisation, will lose out, probably by more than the UK Exchequer. Despite our concerns, the Treasury has to date done no analysis of the impacts of the reforms on developing countries – something that Treasury minister David Gauke was grilled on for over an hour in a parliamentary committee meeting last month.

The government has rightly committed to protect overseas aid from the cuts. Yet if these reforms go through, there is a risk that we will be giving with one hand, and taking with another.

26 Responses to “Why is Osborne relaxing anti-tax haven abuse legislation?”