Those hoping the eurozone’s sovereign debt crisis would finally be resolved today will be disappointed, reports Left Foot Forward's Ben Fox from Brussels. 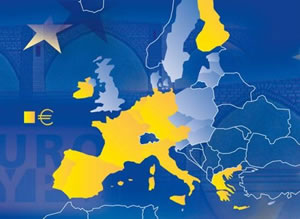 The markets have reacted positively to the rather grandly titled ‘Marshall Plan for Europe’ that is emerging from the European Union summit in Brussels today, with Greek bank shares up 5%, the euro rallying against the dollar in the currency markets, and stock markets across Europe going up.

But those hoping the eurozone’s sovereign debt crisis would finally be resolved will be disappointed.

The past ten days has seen some of the most feverish activity in the financial markets since the euro was launched. Fears that the contagion would spread from Greece and Ireland has pushed interest rates on Spanish and Italian government bonds beyond 6% – the highest level since the introduction of the euro.

In response, the emergency summit in Brussels seems to have resulted in a small step forward in managing the crisis but leaving the more fundamental problems facing the eurozone completely untouched.

Under the tentative plan gradually emerging from the summit, a Franco-German brokered plan will involve existing loans from the European Financial Stability Facility (EFSF) being extended from 7.5 years to at least 15 years, while the effective interest rate would fall to 3.5%. This would give Greece, Ireland and Portugal a substantial interest rate cut and give them a better chance of repaying their debts.

The EFSF would also be able to offer “precautionary credit lines” to eurozone countries who are struggling to borrow, in an effort to stop them requiring a full bailout. Presumably this would apply to Greece, Ireland and Portugal, all of whom have junk credit rating status.

Meanwhile, the private sector seems ready to agree to a deal that will involve banks swapping their existing loans for new bonds that would not mature for 30 years. This proposal has been made by the Institute of International Finance (IIF), and has the backing of Germany and France, although it is the sort of selective default the European Central Bank (ECB) has been vigorously opposing.

The IIF has stated that private investors currently hold €150 billion worth of Greek bonds and that if 90% of these investors take part, €135bn could be rolled over by banks buying new 30-year bonds. This, combined with the extension of EFSF loans, is essentially a form of ‘Brady bond’.

But although this is a small step forward in managing the debt crisis it does not address any of the fundamental problems that must be resolved in the eurozone. The eurozone has an emergency bail-out fund – the European Financial Stability Fund (which will become the European Stability Mechanism in 2013) – but still has no rules for crisis prevention or crisis resolution. It also has no exchange rate policy.

More profoundly, the eurozone will continue to be a currency union that lacks economic union. There is no co-ordination of fiscal and monetary policy. Nor does the summit pave the way for a eurozone debt facility that guarantees the debts of all countries. Shadow chancellor Ed Balls has given his backing for eurobonds, an idea that is gradually getting widespread support across the EU.

Without a debt agency and common eurobonds, speculation and market volatility on bond spreads will continue, meaning the likes of Germany, France and the Netherlands will continue to be liable for bail-outs and will have high levels of bank exposure to the weaker Eurozone countries.

Despite the turmoil that has engulfed Greece, Ireland and Portugal for the past year, toppling two governments in the process, the EU’s leaders in the Commission and the European Council have almost adopted the mantra of ‘crisis? What crisis?!’; instead of treating the debt crisis as a common problem for the entire EU, they have blamed the ‘feckless’ Greeks, Irish and Portuguese. It has been a Greek, Irish and Portuguese crisis – never a European one.

Some basic truths need to be told about the state of European banks and about the eurozone. German, French and British banks have lent recklessly and are owed hundreds of billions of euros by the Greeks, Irish, Portuguese, Italians and Spanish. A large bank recapitalisation is still likely in the next few years. Secondly, the Euro is a political project, but one which needs political and economic union if it is to survive.