Enterprise Zones, the dusting down of a failed Thatcherite policy, shows the government has no strategy for real growth, just ad hoc short termism. 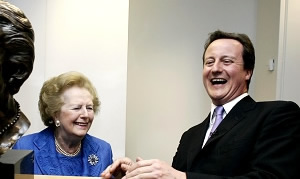 With the economy running on empty and no Plan A or Plan B from Cameron, Osborne and Cable, the government have turned the clock back to the 1980s this week by announcing four Enterprise Zones in Birmingham, Bristol, Leeds and Sheffield which they say will benefit from “discounts on business rates, new superfast broadband, lower levels of planning control and the potential to use enhanced capital allowances”.

Communities secretary Eric Pickles must have been watching re-runs of ‘Minder’ on Freeview when he got in on the act, stating the zones will:

“Accelerate growth and create thousands of new jobs. Our low-tax, low-regulation Enterprise Zones will help make our country the best place in Europe to start and grow a business.”

But let us look at what really happened back in the early 1980s.

Enterprise Zones were seen by the then Thatcher administration as a short term, but quick solution just as the government are doing now with a claim they will help generate growth, create new jobs and re-generate communities.

However research (pdf) by Andrew Sissons for the Work Foundation shows Enterprise Zones did little in the long run to create jobs and growth, and were extremely costly.

They created a short boom lasting on average three years, eventually reverting to back long term decline. Between 1981 and 1996, 4,300 companies were set up in the 11 original Zones, with an estimated 63,300 jobs created – however, of these jobs, only 13,000 were estimated to be new jobs; 80% of jobs created by Enterprise Zones were displaced from other areas within the same locality.

A survey of those companies suggested only 25% of new jobs were attributable to the setting up of the Enterprise Zone.

One of the comments (pdf) of the Work Foundation report is even more damming, saying:

“These intangible assets are key to driving UK innovation and sustaining the UK’s competitive advantage… Enterprise Zones do not promote the productive, knowledge-intensive growth that the UK depends on, but instead promote an outdated model of British enterprise.”

This dusting down of a failed Thatcherite policy shows the government has no strategy for real growth, just ad hoc short termism, that failed to work for Thatcher and won’t work for Cameron and Osborne either.