Three consecutive quarters of negligible growth has left the economy as a whole flatlining; however, some parts of the country are left suffering more than others. 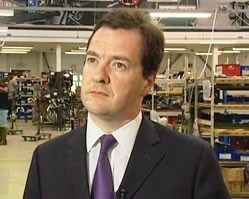 Even allowing for any subsequent revisions, today’s growth figures (pdf) are a dismal reminder of just how slow and uneven the Tory-led government’s ‘recovery’ has been. Three consecutive quarters of negligible growth has left the economy as a whole flatlining; however, some parts of the country are left suffering more than others.

As Larry Elliot pointed out in yesterday’s Guardian, the Office for National Statistics does not provide regional GDP figures, but it is a reasonable assumption that with national growth so low and yet heavily reliant on the performance of London and the greater South East of England, many other regions of England are already experiencing an economic contraction.

For a decade under Labour, the regional development agencies were tasked with reducing the output gap between the English regions and London and the South East.

Unfortunately growth through the noughties was driven by consumption, spiralling house prices and the financial sector where London was heavily advantaged. As the rest of the country improved, so, in turn, did London, resulting in no appreciable narrowing of that gap.

This is used by current ministers as justification for their abolition of RDAs, regardless of the fact that without their efforts and investment, the North/South divide would be even larger than it still is.

As we have chronicled on Left Foot Forward before, the government’s ideological decision to shut the eight English Regional Development Agencies outside London and scrap their budgets, against the backdrop of an uncertain recovery, has been the equivalent of burning the lifeboats on a sinking ship.

Just when they are needed most, they have been shut down. Meanwhile the government’s preferred model of driving economic development – Local Enterprise Partnerships and the Regional Growth Fund – are hopelessly under-equipped to deal with the economic challenges we face.

The under-resourced LEPs are still being signed off in dribs and drabs (Wiltshire and Swindon just last week), but without any core funding to run their affairs, few are yet fully operational.

Meanwhile the RGF’s second round was heavily oversubscribed, with the bids submitted totalling three times the money available. Crucially, there is no promise of further funding rounds – despite this being a quick way of getting money to useful growth-promoting projects – a point shadow chancellor Ed Balls has made before.

In response this dismal state of affairs, the Institute for Public Policy Research (IPPR) last week established a Northern Economic Futures Commission to explore the ‘dominance of the prosperous and powerful Greater South East’ with the ‘lagging regions of the North West, Yorkshire and Humber and the North East’. We’ll have further analysis on this later.

But the fundamental problem with our North/South divide has long been the unequal allocation of public spending. As the IPPR pointed out, spending on transport in London is now £802 per head compared with £333 for the North West, £272 for Yorkshire and Humberside and £248 for the North East.

It is little wonder we have such an asymmetric national economy when transport, defence, civil service jobs, science and technology, the Olympic Games, Crossrail and the first stage of High Speed 2 all see London and the south east receive the lion’s share of spending, courtesy of the public purse.

In contrast, the north and midlands are served up piecemeal gestures like enterprise zones when they really need something akin to a Barnett formula to counter this geographic bias in public spending (especially as the northern regions are also squeezed by the more generous spending settlements awarded to Scotland, Wales and Northern Ireland).

The bottom line with today’s dreadful growth figures and the sheer inadequacy of the government’s approach is that many communities across the northern half of the country are effectively still languishing in the economic deep freeze.