David Cameron has raised the prospect of the UK government initiating a referendum on independence - before the Scottish government’s planned 2015 date. 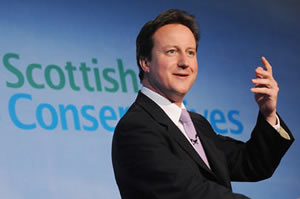 David Cameron has started a war of words with Scottish first minister, Alex Salmond, by raising the prospect of the UK government initiating a referendum on independence before the Scottish government’s aim of holding a vote towards the end of the current term of the Scottish Parliament.

In an interview with the Spectator magazine, Mr Cameron explains:

“I want to treat the first minister and his government with respect, I think it’s the right thing to do, but if the whole of the next few years becomes about tussling rather than governing, then there may be a moment where we have to say, OK, we need to answer this question properly.

“But I don’t think we’re there at the moment.”

His comments come just weeks after Conservative MP Jacob Rees-Mogg failed in his bid to amend the Scotland Bill to provide for an early referendum.

In a sharp response, a spokesman for Alex Salmond warned the prime minister not to interfere, arguing:

“David Cameron would do better to focus on the crisis at the top of his own Government rather than sabre-rattle about interfering in the affairs of Scotland’s government. The people have spoken and given a powerful mandate for the policy detailed by the SNP in the election – the right to choose independence on the basis of one referendum, agreed by the Scottish parliament, towards the end of this Holyrood term.

“David Cameron should be focused on delivering the additional job-creating powers in the Scotland Bill that the SNP also set out in the election, and secured the strongest possible mandate for – which is a key test of his ‘respect agenda’ for Scotland.”

The exchanges come as the debate over Scotland’s constitutional future appears to be stepping up a gear, with senior, elder statesman from both the Conservatives and Labour intervening in the debate on independence.

“I’m sure there are many people in Scotland, me included, who, when it comes to the referendum, and I’ve already put this on record, who would say why not have it now?

“I believe passionately that Scotland’s best interests lie both within the European Union and within the UK and I will play a very, very active part in that, as will everybody else who has got Scotland’s interests at heart.”

The Sunday Telegraph, meanwhile, this weekend quoted former prime minister Sir John Major, in a speech to the Ditchley Foundation, arguing for Scotland to gain control over everything other than foreign and defence policy.

Publishing extracts of his speech, the newspaper quotes Major as saying:

“The present quasi-federalist settlement with Scotland is unsustainable. Each year of devolution has moved Scotland further from England. Scottish ambition is fraying English tolerance. This is a tie that will snap – unless the issue is resolved. The Union between England and Scotland cannot be maintained by constant aggravation in Scotland and appeasement in London. I believe it is time to confront the argument head on.”

Suggesting the case for independence “thrives on discontent with the status quo”, he continued:

“Why not devolve all responsibilities except foreign policy, defence and management of the economy?

“Why not let Scotland have wider tax-raising powers to pay for their policies and, in return, abolish the present block grant settlement, reduce Scottish representation in the Commons, and cut the legislative burden at Westminster?”

In the Speccie’s analysis of the speech, James Forsyth writes:

“Quite a lot of Conservatives, including several close to the leadership, are drawn to the idea of the Scots having fiscal autonomy but fewer seats in the Commons. They see it as a way of preserving the union, while increasing the prospects of Tory governments at Westminster.

“They also argue that only if Scotland is in charge of raising the money it spends, will the centre-right have a hope of reviving there.

“But set against this is the view that fiscal autonomy may well lead to independence in a generation, in the same way that devolution has led Scotland to this current place. There’s a reason that the SNP has welcomed Major’s speech.”