The Committee on Climate Change is the independent advisor on emissions - yet at present it is being prevented from investigating the ongoing rise in UK emissions. 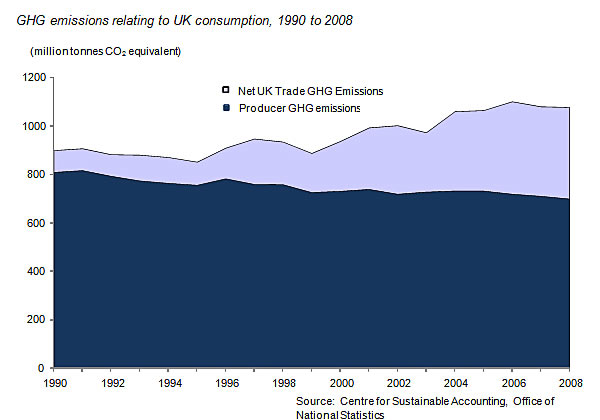 The Committee on Climate Change (CCC) is the UK government’s independent advisor on greenhouse gas emissions. Yet at present it is being prevented from investigating the ongoing rise in UK emissions.

As Left Foot Forward reported earlier this year, the UK’s carbon emissions continue to rise when viewed from a consumption perspective: domestic emissions are down, but our lifestyles are as dependent on carbon as ever, as can be seen once you factor in imported goods and services.

You would have thought this would merit investigation by the CCC. Indeed, they’re very keen to do so. Yet to date the government has turned down every proposal to let them. This bizarre situation has arisen out of negligence, budget cuts and calculated political decision.

For many years now the government has been well aware of the inconvenient truth about ‘outsourced emissions’, yet has resisted taking meaningful steps to address them.

Left Foot Forward also understands that at one stage, a ministerial special adviser at the Department for the Environment, Food and Rural Affairs (DEFRA) attempted to block publication of publicly-funded research showing the true scale of outsourced emissions, though they were unsuccessful in doing so.

It is now understood that resistance to taking action has shifted from DEFRA to DECC (the Department of Energy and Climate Change), where budget cuts have forced a scaling-back of activities to those considered ‘core competencies’.

Because outsourced emissions are neither counted by the UK nor covered by the Climate Act, their continued rise goes unattended – though they continue to heat the planet. The Committee on Climate Change knows this, but is powerless to launch an enquiry until given a mandate and requisite budget by DECC.

Yet so far, the government seems to think that doing nothing is the lower-risk option.

When pressed on the subject back in 2009, its stock response was to say ‘let’s wait until after Copenhagen’, perhaps hoping a global climate deal would negate some of the problems of outsourced emissions.

After the failure of the Copenhagen talks, the government’s excuse switched, instead pleading:

“…the committee [on climate change] has more than enough work to do in the next year to keep it busy.”

Too busy to investigate rising emissions? The mind boggles.

Most recently, Minister of State Greg Barker has simply refused to make the call, stating:

“The government have no immediate plans to ask the CCC to undertake work on outsourced emissions.”

But now pressure is building on government to make that call.

“Increasingly the UK’s carbon footprint lies not in the direct emissions within our borders but in the emissions generated in production of goods for UK consumption. The Committee on Climate Change should be tasked with examining whether the UK could develop a pragmatic methodology for assessing and addressing these emissions.”

Last week, a conference on outsourced emissions organised by UKERC (the UK Energy Research Council) and Leeds University brought together academics and policymakers, underlining the breadth of current research into the matter. Presentations were given by representatives from DEFRA, the Carbon Trust, WRAP (Working together for a world without waste) and multiple universities – but DECC staff, though invited, were noticeable by their absence.

Speaking to the Guardian recently, Greg Barker appeared to give ground on the issue, acknowledging the:

“…need to build an economy that has more advanced manufacturing where we stop just reducing our carbon emissions by sending stuff offshore to less regulated markets.”

If Mr Barker’s professed concern is sincere, he will unshackle his advisers, and give the Committee on Climate Change the freedom to investigate. After all, what does he have to hide?