If the economy continues to stagnate, the coalition could borrow more than Labour this year, writes Cormac Hollingsworth. 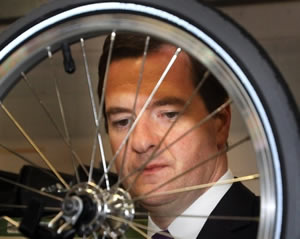 The economic argument about the timing and extent of the cuts has always been an argument about how best to cut the deficit. Many imagine this argument will be settled when we look at the numbers in March 2015.

However, it may actually be decided by what happens in the next nine months. That is because what happens this year, in revealing the economy’s capacity to generate tax receipts and the coalition government’s ability to control spending, will ripple through the next four financial years.

If the economy continues to stagnate, the coalition could borrow more than Labour this year.

Prior to the Osborne June Budget, the Office of Budget Responsibility made a prediction (see pdf) of what Alistair Darling’s borrowing would have been for fiscal 2011; they estimated borrowing of 8.3% of GDP with a growth rate of 2.6%.

Borrowing would then fall to 3.9% of GDP by 2014/15. It’s of more than passing academic interest that while the OBR thought borrowing would fall more than Mr Darling’s halving of the deficit promise.

It is of more direct relevance that if the government borrows more than 8.3% this year – more than Labour would have – then it will make it much harder for them to reach their commitment to eliminate the deficit.

The coalition’s spending plans are factored into the OBR’s new predictions that have followed the June budget, the November spending review and the March budget. Each time they made a lower prediction of growth for 2011 and a higher prediction for borrowing. Graph 1 below shows how the OBR estimates borrowing changes with growth.

The Treasury has indicated consensus growth for 2011 is 1.3%. Growth at that level for fiscal 2011 would result in borrowing of 8.15% of GDP, just below that predicted for Mr Darling’s budget.

From the OBR’s estimates we can project that if growth for fiscal 2011 is below 1.1% then we could be in a scenario where the coalition is borrowing more than Labour.

A word of caution, however, is needed.

Next month is a high month for tax receipts because many companies pay their corporation tax in June, so one must be careful not to read too much into what is going on in the economy. Nonetheless, by this time in 2010, borrowing was already £1.8 billion below 2009 borrowing; the borrowing numbers reported last week show borrowing only managed to fall by £370 million so far this year.

For Public Sector Net Borrowing to fall to the OBR’s prediction of £122 billion, the government must borrow £6.25 billion less in each of the final three quarters of fiscal 2011. That could be a tough target.

In fiscal 2010 that borrowing reduction was only achieved in the final quarter, January-March. Time will tell, but there’s clearly a chance the government is about to lose control of public borrowing.

So what will it mean if stagnant growth keeps the deficit too high, with levels of borrowing higher than under Labour? This will be a sign of collapsing confidence in both the business and consumer sectors, and fear of this scenario is obviously what is driving Labour’s plan B.

But if confidence does indeed continue to fall there will need to be a rethink on both sides of the aisle over what policies will re-engage the private investment that would be needed to stop the economy from stagnating with high borrowing.

Two related policies suggest themselves:  a National Investment Bank as suggested by Gerald Holtham and Lord Skidelsky, together with a Co-operative Housing Bank. The institutions themselves would take time to set up, so the government would need to partner with existing banks to distribute the initial loans, but they do offer us a road out of this avoidable downturn.