The head of the Roman Catholic Church in England and Wales, the Most Rev Vincent Nichols, has slammed the coalition's £18 billion welfare cuts. 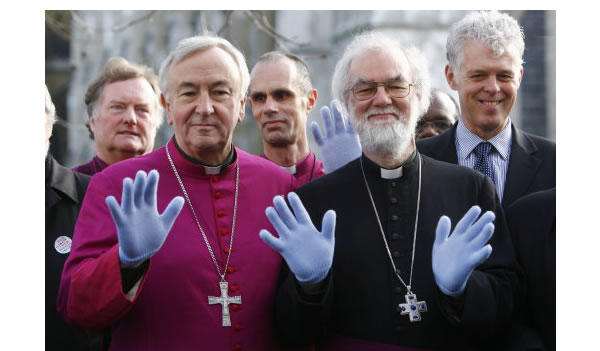 The head of the Roman Catholic Church in England and Wales, the Most Reverend Vincent Nichols, has slammed the coalition’s £18 billion welfare cuts. His intervention follows the recent row over whether the government knew that its changes to housing benefit would increase the number of homeless families, and comes after the head of the Church of England, Dr Rowan Williams, spoke out against the coalition’s cuts.

In a letter to work and pensions secretary Iain Duncan Smith, seen by The Times (£), Rev. Nichols is reported to have written:

“As you know, some estimates that have already appeared in the media suggest 40,000 families may be rendered homeless. If this were indeed the case it would surely be a perverse result of policies aimed at reducing dependency of the ‘benefits culture’, since emergency support would immediately need to be put in place.

“In some areas of Westminster, it is being suggested that one in six children may have to move home (and probably move school), while in Maida Vale the effects may force up to 43 per cent of households to move. We fear that the cost of this may be felt most by vulnerable families, whose support networks may rapidly disappear in the process.”

Communities secretary Eric Pickles and housing minister Grant Shapps acted swiftly two weeks ago to deny claims in a leaked departmental memo that the reforms risked making 40,000 families homeless. But closer examination showed that they had done so through conflating and confusing two separate ways of understanding homelessness as a means of obfuscation.

Other aspects of Mr Duncan Smith’s welfare reforms have come under attack recently. New analysis (pdf) by the Institute for Fiscal Studies for the Fawcett Society shows that lone mothers are, on average, among the biggest losers of the government’s tax and benefit changes. They are set to lose up to 5 per cent of their net income due to the reforms over the next four years.

The report also finds that lone parents are suffering the greatest from cuts to public services, and are facing increased pressure to find paid work at a time when job opportunities and support for childcare and training are diminishing.

Meanwhile, the Institute for Public Policy Research (IPPR) has concluded (pdf) that IDS’s plans to create a Universal Credit, while a sound idea in principle, will not be able to ensure that people are always better off in work. This is because it cannot be adjusted to take into account local differences in childcare and transport costs.