Welsh first minister Carwyn Jones has praised the chancellor, George Osborne, for a “refreshing approach” to the thorny issue of how Wales is funded. 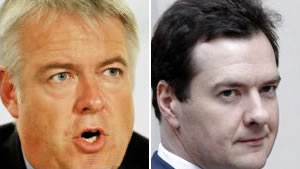 Following discussions at the treasury yesterday, Welsh first minister Carwyn Jones has praised UK chancellor George Osborne for a “refreshing approach” to the thorny issue of how Wales is funded.

Speaking ahead of the meeting, Jones made clear his government’s objective, explaining:

“We know that the current way that Wales is financed – the Barnett Formula – is long out of date. Over time, it is very likely to lead to ever-greater underfunding of Welsh public services.

“Clearly, that is unacceptable, and any new system must address that problem.

“We also need to correct the anomaly that Wales will be the only part of the UK where the government cannot borrow to fund investments in projects such as roads and hospitals.”

Following a two-hour meeting, which took place ahead of an expected announcement about a commission into the funding of Wales, Jones praised Mr Osborne for a “very constructive” meeting, adding:

“It was very refreshing to see the approach that was taken by the chancellor. We talked about a wide range of different subjects and we are now going to work together to continue the process of ensuring an appropriate funding package for Wales.”

Plaid Cymru leader Ieuan Wyn Jones, however, accused Labour of a “lack of ambition” over financing.

“Obviously we will be pressing the first minister for a full breakdown of his discussions so that they can be fully examined and scrutinised by the Assembly. The statement that has been released is once again short on any real detail.

“We need the first minister to confirm that he is calling for the devolution of fiscal powers as well as reform of Barnett. We must accept some responsibility for the money we spend, and the devolution of taxes would do that. If he doesn’t do that, he’ll be letting Wales down.

“The onus is on Carwyn Jones to negotiate and deliver a better financial deal for Wales. In the economic times we are in, where only this week the Tories and Lib Dems have announced plans that will cut benefits to 30,000 people without any employment to fall back on, we cannot afford to take a backseat approach.

“The lack of ambition of the Labour government is the greatest threat to Wales’ economic regeneration.”

Elsewhere, following the suspension of two Liberal Democrat Assembly Members, a report by the Welsh Commissioner for Standards, Gerard Elias QC, has led to mixed blessings for John Dixon and Aled Roberts. Whilst Dixon has now been barred from sitting in the Assembly altogether, being replaced by the Lib Dems’ second candidate on their list for the South Wales Central region, Eluned Parrott, for Roberts things were a lot better.

Following the Commissioner for Standard’s conclusion Mr Roberts did all he could to avoid finding himself in a public office that legally prevented him from standing for the Assembly, members have voted to reinstate him to the chamber, with all parties, apart from Plaid Cymru, split on the issue.

“The advice of Gerard Elias QC was clear and I am delighted that that legal advice was taken on board by assembly members. I believe that today, the assembly showed itself to be a mature institution, confident enough to take the right course of action to right a wrong. Aled Roberts can now get on with the job of representing the people of north Wales who elected him.

“I know that he will do so with distinction, enhancing the reputation of not just his party but the assembly.”

Speaking ahead of the vote, Roberts told his local paper, The Leader in Wrexham and Flintshire:

“It’s been a frustrating time for me and a very difficult time for my family and I just want to situation to be resolved. The support I have received from my colleagues on the council has been gratefully received. I have also had lots of support locally, in the form of many phone calls and emails. I have also been stopped in the street.

“All this has been very heartening and I would like to thank everyone for that.”