An increasing number of companies have withdrawn their advertising from Sunday’s News of the World in the wake of the phone hacking scandal, reports Claire French. 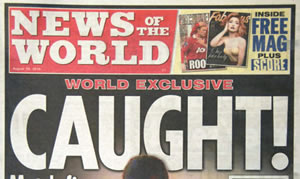 An increasing number of companies have withdrawn their advertising from this Sunday’s News of the World (NotW) as more, potentially crippling accusations of illegal activity emerge. Ford led the way last night, saying they would use “alternative media within and outside News International Group”, instead of advertising in the NotW.

This lunchtime, the Co-operative Group tweeted that it had taken the decision to suspend all links with the newspaper, having previously signalled that its advertising would go ahead this weekend.

“These allegations have been met with revulsion by the vast majority of members who have contacted us.”

Aldi also announced it would cut its advertising, from the Irish edition of the NotW. As Roy Greenslade reported on the Guardian’s website this afternoon, the German company said:

“We are reviewing our advertising in the Irish edition and are not planning any future adverts in this newspaper pending the outcomes of the external investigations.”

According to Political Scrapbook, which has compiled a comprehensive list of NotW advertisers, Sainsbury’s is currently in discussions regarding its advertising; Tesco is awaiting the outcome of the police investigation into alleged phone hacking; Morrisons, however, will continue to advertise in the newspaper.

The loss of advertising, which, according to the newspaper’s rate card, can cost up to £65,000 for a full colour page, is likely to hit the paper hard. Its circulation in May was down to 2,657,232 – 7.1 per cent fewer than the same time last year.

At Prime Minister’s Questions earlier this afternoon, David Cameron agreed with Labour leader Ed Miliband, who called for an open inquiry into the accusation that journalists at the News International publication had paid police officers for sensitive information as well as hacking phones.

7 Responses to “Hour-by-hour, more and more advertisers desert News of the World”