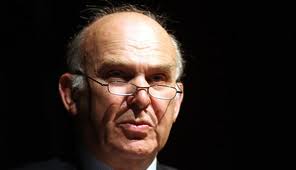 By Mik Sabiers of Unite

Business secretary Vince Cable had a rough ride at the GMB conference on Monday, but as Kevin Maguire wrote in the Mirror, he really had only himself to blame. His half bluff, half veiled threat to tighten the UK’s already strict labour laws highlighted the coalition government’s focus on conflict instead of consensus.

The ‘Do Nothing’ minister, who watched from the sidelines as over 2,000 high-tech jobs went at Pfizer in Sandwich, suddenly decided to ‘Do Something’; dangle the spectre of more restrictions to the UK’s choking labour laws in front of the very people to whom saving UK jobs matters most – working people.

UK  strikes are at an 80-year low, not because the UK is in the midst of a period of industrial harmony, but because workers are fearful for their jobs as the coalition cuts bite.

And unions have shown time and again how working with management, jobs and businesses can be saved.

Last month, Unite struck a deal with Burton’s Foods to secure the company’s operations in Moreton after the Wirral site was threatened with closure – but only because we had 90 days to do so, a period the government wants to cut right back.

Unite presented an alternative – and viable – business model, and although the whole factory was not saved the chocolate refinery was retained, and £2.8 million of new money invested in the site to secure jobs.

Or there was last year’s deal between Unite and Jaguar Land Rover cementing  the future for some 16,000 car workers across the UK for the next decade.

Or how about this year’s working time agreement between Honda and its workers to deal with the shortage of parts due to the Japanese tsunami? Workers receive their full pay – even though production has been halved – and will make their hours up later in the year once parts are available ensuring the company will be able to meet demand.

However instead of looking to work constructively with unions, the government is bullying workers with threats to further restrict UK labour laws – already some of the most restrictive in the developed world. Not that anti-union legislation has made the UK a beacon of growth; our economic performance lags behind that of Germany, and even reputedly public spending-addicted France.

If Cable looked  to the continent for some inspiration, he would learn that the strength of Germany’s manufacturing industry is driven by high levels of research, investment in training, good government support, fair wages, decent rights and close co-operation with the workers.

Because often workers on the shop floor know what makes the company tick. But the coalition if giving a green light to employers who want to confront their employees not work with them.

Like the leader of Southampton county council, Cllr Royston Smith, currently embroiled in a city-wide dispute which has united traffic wardens with refuse collectors in anger over the council’s plans to force the 4,300-strong workforce to accept poorer contracts by July 11th or be dismissed.

The unions proposed cost-saving measures to the council – including reduced pay and conditions for a limited 12 month period – in exchange for guarantees on jobs. These were rejected by the council who would not even meet with the unions despite local feeling running two to one in favour of the striking workers.

Whether it was the failed fight to stop Cadbury being swallowed by a debt-laden Kraft or the off-shoring of skilled IT jobs at Birmingham city council, the  scales are too heavily tipped in favour of  employers with short term interests.

Cable surely understands that people only withdraw their labour as a last straw.

Instead of restricting workers’ rights Cable should be looking at the real problems that face this country; how do we breathe life back into our high streets, our local shops, our local businesses and our local communities?

The UK’s workers are already the easiest and the quickest to sack in Europe; they are not this country’s problem.

If Cable spoke up for the workers he could do something positive for this country’s economy and his party’s (tarnished) liberal credentials along the way.

Help Southampton workers save their jobs – Unite members at Southampton city council will be sacked on 11 July unless they sign inferior contracts. Help them defend their jobs. Any contributions, however small, can help: TGWU 2/8 Strike Fund, Unity Trust Bank, Ac No: 20185358, Sort Code: 08-60-01. NB: this is a Unite fund. A long-standing TGWU account is being used to ensure there is no delay in supporting the workers.

22 Responses to “Cable should work with unions, not bully them, for the good of the economy”