The government and the unions are scrapping over public opinion, and so it seems worth looking at the short-term and long-term trends on polling on the issues. 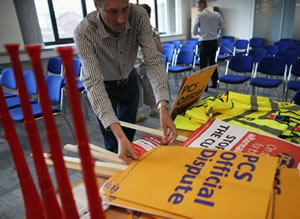 Today begins what has been variously compared to the ill-fated general strike of 1926, and a long hot ‘summer of hate’. The government and the unions are scrapping over public opinion, and so it seems worth looking at the short-term and long-term trends on polling on industrial relations.

On the short-term trends, UK Polling Report has done an excellent round-up, but the condensed version is that on most of the issues, the public are fairly evenly split.

In this polling, unlike election polling, leads of single figures may not mean much as this is not heading for a ‘snapshot moment’ when the battle for public opinion will be won or lost.

• Strikes are a legitimate way for unions to protest against the general direction of government policy: -27 (Populus 19 June);

• The Government should legislate so that strikes are not allowed in certain public services: +15 (Populus 19 June);

• Strike action is a sign of how little power the unions have in Britain today: -23 (Populus 19 June) (indicates that a plurality do think unions are weak);

• Are public sector workers right to go on strike to protect their pensions?: -12 (ComRes 19 June);

• Do public sector workers have a legitimate reason to go on strike over their pension plans?: -14 (ComRes 27 June);

• Public sector workers are facing an unfair decline in living standards due to the cuts -5 (ComRes 19 June);

• Are the public sector workers right to go on strike: 0 (Ipsos-Mori 19 June)

What is clear as you go through the various data tables is that a lot of the answers depend on the polling – the public have sympathy with public sector workers, but less sympathy, if not animosity, towards striking.

What is certainly true is that there is not a groundswell of anti-union public opinion that we saw in the late 70s/early 80s. Ipsos-Mori trend data shows that a large majority of people do not think that trade uniosn are too powerful: 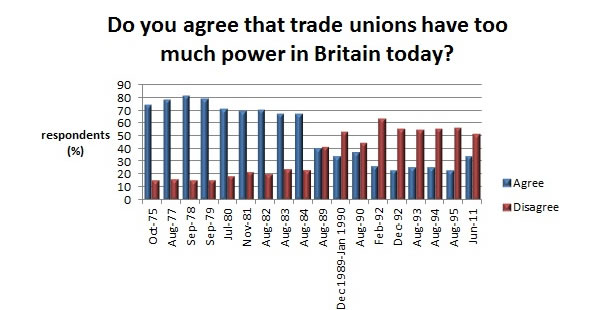 Two notes of caution are needed when predicting what will happen as the dispute unfolds. Any long-running political dispute from a war down to an office feud, rarely ends up being about what it started off as.

The Miners’ strike of 1984-5, for example, may have started off as a dispute about the rate of downsizing of the industry – something that had been going on fairly continuously since 1945 – but ended up being about whether coalmining should largely exist at all as an industry or, arguably, the UK’s entire economic settlement. By the end of this dispute, we may well be arguing over something other than public sector pensions, if we are not already.

Also, while game theorists say that antagonists should avoid situations which can lead to a zero-sum game – if one party wins, the other must lose – this could end up being a minus-sum game – both sides lose.

The government may get their way, discredit the union movement, and pave the way for a raft of anti-union legislation. But all that can be acheived while simultaneously earning a reputation for bullying teachers and the public servants the population relies on. Even if the government ‘wins’ it may well ‘lose’ – and badly.

14 Responses to “The coalition and the unions: the state of play on day one”