Hamza al-Khatib was 13 years old when he was murdered. He was arrested a month ago by Syrian security forces. His dead body was returned to his family last week. 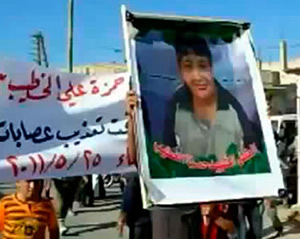 Hamza al-Khatib was 13 years old when he was murdered by his own government. He was arrested a month ago by Syrian security forces. His dead body was returned to his family last Wednesday.

A doctor who examined the body found that that before the boy had died, he had been beaten with sticks and shoes.

“He was shot many times and his face was unrecognisable from swelling,” one activist said. “They cut off his penis before he died.”

A picture of his dead body, his face swollen, a hole in his chest, was posted on the Syrian Revolution 2011 page on Facebook.

This is not an exception to the rule of terror that Syrian President Bashar al-Assad inherited and rules over, this is the cold, ruthless and common reality. The Syrians are not surprised by this, and we are barely acting on it, but many are speculating that this murder could help turn the tide.

This video will shock you:

The Syrians have lived with fear for decades, but when innocent children are tortured and mutilated to death, what is the point of not resisting, of not rising up. Assad’s offer of a “general amnesty” yesterday was quickly dismissed.

Syrian activists gathered for a conference in Turkey dismissed the amnesty offer, with one describing it as “too little, too late”.

“This measure is insufficient,” said Abdel Razak Eid, an activist from the “Damascus Declaration” group. “We are united under the slogan: the people want the fall of the regime and all those who have committed crimes brought to account.”

Another activist, Mohammad Abdullah, said the amnesty offer showed “weakness on the part of the regime.”

Human Rights Watch released a report today on the extent of the murder and torture within the country, saying:

“Systematic killings and torture by Syrian security forces in the city of Daraa since protests began there on March 18, 2011, strongly suggest that these qualify as crimes against humanity.”

• An attack on al-Omari mosque, which served as a rallying point for protesters and a makeshift hospital for the wounded protesters, and attacks on ensuing protests from March 23 to 25, killing more than 30 protesters;

• Attacks on demonstrators during two protests on April 8, resulting in at least 25 deaths;

• Attacks during a protest and a funeral procession in the town of Izraa on April 22 and 23, resulting in at least 34 deaths;

• Killings during the blockade of Daraa and neighboring villages beginning on April 25, and during an effort by residents of neighboring towns to break the siege on April 29, which left up to 200 dead.

“For more than two months now, Syrian security forces have been killing and torturing their own people with complete impunity. They need to stop – and if they don’t, it is the Security Council’s responsibility to make sure that the people responsible face justice.”

So far we have seen sanctions on the regime from America, Canada and the EU. On top of this have been strong words from US Secretary of State Hillary Clinton, who said President Assad’s position was becoming “less tenable” by the day.

She went on to say:

“The demands of the Syrian people for change only grow stronger.”

“[President Assad has] not engaged seriously in any kind of reform efforts.”

The real question is whether we have engaged in any serious effort to force this reform and more importantly to protect the people of Syria.

Of course Assad cannot answer the calls of the people for change or justice without disbanding his regime and facing trial alongside his army commanders and secret police. It goes without saying he will not to do this, so the question falls to the UN security council; will you do anything to help the people of Syria, 1,000 of whom are reported to have already been killed, 10,000 have already been detained?

To follow the revolution you can read the Syrian Revolution Digest, written by an activist in exile following anti-government activism; you can also see pictures of the unrest and protest on this channel.

12 Responses to “Syria, where innocence is no defence”