As he prepares do descend into the bearpit for his weekly duel with the rejuvenated Mr Miliband, David Cameron will be well advised to steer clear of this morning's papers. 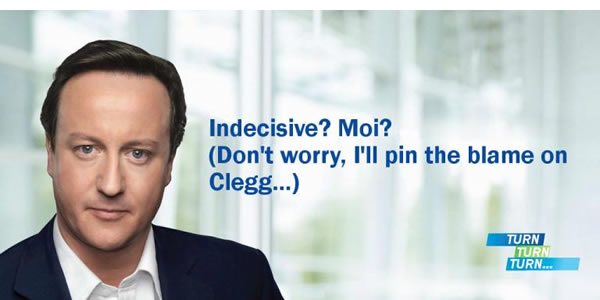 As he prepares do descend into the bearpit for his weekly duel with the rejuvenated Mr Miliband, David Cameron will be well advised to steer well clear of this morning’s papers – they do not make pretty reading for Number 10. Right across the board, the prime minister comes in for criticism over the latest U-turn on sentencing, and the plethora of U-turns generally.

The Indy is perhaps the most damning, accusing the prime minister of “running scared”, and calling him a “political coward” – as well as having a go at Ed Miliband and Nick Clegg:

“Mr Cameron has shown himself to be a political coward who prefers being popular to doing what is best for the nation in the balance between protecting the public, deterring criminals and reforming offenders. But other politicians are little better.

“Ed Miliband, in an opportunistic attempt to score points against Mr Clarke, has committed Labour to a bad policy on prisons. And Nick Clegg, who went into the election pledging to abolish short prison sentences, has immersed himself in complicit silence.”

“The brief illusion of liberal government disappeared with the publication of the sentencing bill on Tuesday. The Rose Garden promise had been for a calm coalition animated by progressive values and guided by reason. That promise was fleetingly fulfilled by the justice secretary, Ken Clarke.

“Last year he stood ready to unlock 20 years of failed thinking, with a green paper which accepted that Britain’s drift towards mass incarceration was imposing an unacceptable human and financial cost. Now it has been decisively breached by a prime minister who once claimed to be a liberal Conservative.

“Make no mistake: after David Cameron’s rewriting of this bill, Mr Clarke’s rehabilitative revolution lies in tatters… Mr Cameron has long faced both ways on crime, but on Tuesday he made his choice and lurched to the right by reheating the “two strikes and you’re out” life sentences once associated with Michael Howard, the home secretary he worked for as a young man.

“For all his reinvention of the Tory aroma, liberal noses now catch a niff of the nasty party of old.”

A position echoed by the FT (£), which says the chance for a new approach to law and order “may have been lost”:

“The flip-flop announced on Tuesday by David Cameron, the prime minister, is troubling. Although poorly presented by the justice secretary, Ken Clarke, the idea of locking up fewer criminals had some merit. Britain’s enthusiasm for incarceration, while very expensive, produces little evident benefit in terms of crime reduction. Thanks to the U-turn, the chance for a new approach may have been lost.

“Mr Clarke tried to break the stultifying consensus on crime that exists between the Tories and the Labour party. In the past 15 years, both have vied to increase prison places. While it is true that crime has fallen over this period, it should not be taken to mean that prison works.

“Re-offending rates remain lamentably high; nearly half of all prisoners are reconvicted within a year of their release. In this context, he was right to question what has become a ‘political arms race’, and to call for an end to penal policy being concocted by home secretaries with ‘a cheque book in one hand and the Daily Mail in the other…’

“The U-turn also leaves penal policy set on a course that remains prison-focused. Indeed, the reforms will now toughen it marginally with mandatory sentences for knife crime. This is a lost opportunity for the country.”

The Telegraph, though welcoming the U-turn, criticises some aspects of the new policy and says “better judgement” will be needed in future:

“There should be scepticism about the plan to ensure that law-abiding homeowners who injure or kill burglars while using “reasonable force” to protect themselves will not be prosecuted, which is a promise we have heard trotted out before.

“The Government is acquiring a reputation for abrupt policy changes. Perhaps it should be commended for listening to public concerns rather than blundering forward with a bad law. And perhaps, after a frenetic year of reform, political reality has forced Mr Cameron to take a grip of the Government’s agenda. Never the less, in the months ahead, better judgment and greater consistency are needed.”

At the other end of the market, the Mirror is the most scathing, and concise, in its criticism of the shambles:

“Experts in good governance will be running courses on this Conservative car crash for decades. The sentencing U-turn was one of the more humiliating, for both Mr Cameron and Justice Secretary Ken Clarke. The pair had no choice but to abandon a foolish plan to lop sentences in half for pleading guilty.

“It isn’t the first botched reform and it won’t be the last from this incompetent coalition.”

And, right on cue, this morning we witnessed another U-turn…