The latest news on jobs highlights the weak state of the labour market and does not paint the picture of an economy just about to return to confidence. 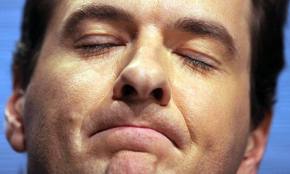 The latest news on jobs highlights the weak state of the labour market and caps a bad start to the month.

Today’s gloom comes from the Recruitment and Employment Confederation’s (REC) monthly Report on Jobs. The REC is the recruitment industry’s trade body and their report is based on a monthly survey that has a reasonable record for picking up on prevailing trends in recruitment – agencies tend to be the first to be affected when the demand for new staff takes off or dries up.

At the heart of the report lie a couple of questions that ask recruitment consultancies about the numbers they have placed in permanent positions and their billings for temporary and contract staff compared with one month ago.

The latest figures aren’t desperate in any way – any index figure over 50 means that more respondents reported that things are better this month than said they are worse. But remember that the strength of these indexes lies in showing the direction of change: the figures for both permanent and temporary staff are worse than last month and growth is at a seven month low.

The Report on Jobs also looks at vacancies and today’s edition found “a weaker rise in overall demand for staff”, rising at its “slowest pace in five months”.

A comparison with 12 months ago shows stronger growth in demand for permanent staff in just two categories and weaker in six:

The sense that economic growth is too depressed to prompt a labour market take-off is unsurprising, given the recent sequence of bad news. June began with the Purchasing Managers’ Index for manufacturing at its lowest point for twenty months; in construction, new orders were 23 per cent lower in the first quarter of 2011 than the last quarter of 2010; new car sales fell 1.7 per cent in May and house prices “wilted” in the Spring, according to the Halifax.

Unsurprisingly, the British Retail Consortium reported yesterday that customers are “reluctant to spend”, sending sales 2.1 per cent lower than 12 months ago.

This doesn’t look likely to change soon if a final feature in today’s report is correct. The report finishes with a look at the “misery index” (inflation plus unemployment) which, as REC report, is “uncomfortably close to the 20-year high seen in February”. 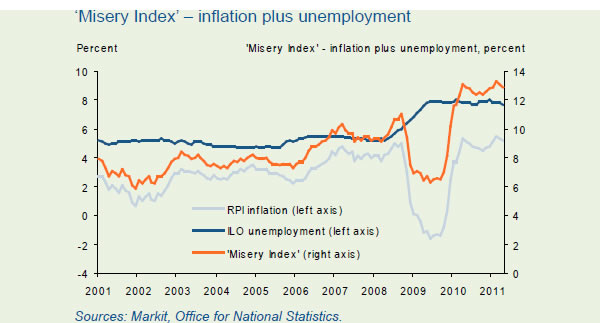 This does not look like a picture of an economy just about to return to confidence.

12 Responses to “Misery on the rise, while demand for jobs is falling”