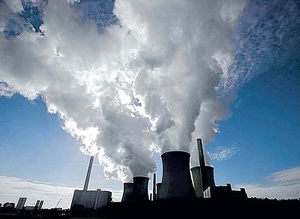 Deficit reduction comes before energy and climate change in the coalition agreement – but in real terms policy priorities there is no alphabetised contents reasoning to hide behind. The case for important signalling and strong leadership from the coalition was made all the more urgent this weekend when the International Energy Agency announced carbon emissions have hit an all-time high.

Left Foot Forward has rightfully led scrutiny of this government’s claim to be the greenest government ever. From transport, to the undermining of the green investment bank and the wider concerns around the green deal, there have been widening concerns about the genuine nature of the government’s environmental agenda.

But as pointed out by Joss Garman on this blog, it is in the interests of those from accross the political spectrum that the government does well on environmental issues, and where progress is made, it should be applauded. Reigning in Osborne’s obsession with deficit reduction above all else to deliver an agreement on climate change targets was Davic Cameron’s most recent environmental achievement.

There were further positive signs too from Nick Clegg when unveiling further details around the green investment bank last week. But in the light of the IEA’s recent data release, such achievements will have to be built on in the next couple of years and the Lib Dems will have to do all they can to prove to their voters they have a voice in the coalition that can deliver the strong policy we need on climate change.

Without such strong action on climate change, it will unfortunately be a lot more than Nick Clegg’s job on the line. As Faith Birol, chief economist of the IEA commented, the recent rise in global emissions suggests that avoiding dangerous climate change is likely to be just “a nice Utopia”.

This coalition is presiding over the UK economy at a crucial stage in the fight to prevent dangerous climate change. It is in no one’s interest that they fail.

17 Responses to “Emissions hit all time high: how will the “greenest government ever” respond?”