George Readings reports on the controversy surrounding banned Islamist extremist Raed Salah - who was set to appear in Parliament alongside three Labour MPs. 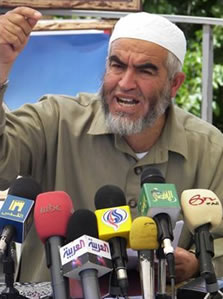 Hundreds of thousands of people enter the UK every day. However, one entry in the last week – that of Raed Salah, on Sunday – is deeply embarrassing for the Government. Salah is the leader of the Northern Branch of the Islamic Movement in Israel. His publicly stated views (and those of the Islamic Movement in Israel, of which he is leader of the Northern Branch) had earlier caused Theresa May to ban him from the country.

However, for a reason which remains unclear, he was allowed entry regardless.

Coming so shortly after the Tory-led government relaunched its Prevent strategy for tackling terrorism, this is a serious failing for May and her colleagues. Somehow, the Home Office was unable to ensure that the UK Border Agency followed a directive from the Home Secretary herself. How and why this happened requires immediate attention.

Moreover, banning extremists from the country was one of David Cameron’s key promises before he came to power. (He has made even less headway on his other pledges in this area – banning Hizb ut-Tahrir and addressing extremism on university campuses.)

But the government’s failure to deliver on its own policies should not distract us from a more profound issue. At the time the police caught up with Salah on Thursday he was not on the run, trying to evade capture. He was preparing to speak at a ‘Palestine Solidarity Campaign’  meeting in Parliament, alongside three Labour MPs: Jeremy Corbyn, Yasmin Qureshi and Richard Burden.

Salah had already taken part in a smaller event in a Lords committee room on Monday. The room had originally been booked by Labour peer Lord Ahmed, but  (Lib Dem) Baroness Jenny Tonge put her name to it after it transpired that Lord Ahmed had exceeded his booking allocation.

This is not the first time that Lord Ahmed has been involved in the furore surrounding a controversial speaker’s invitation to Parliament. In early 2009 he was one of the most vocal critics of the invitation extended to anti-Islam Dutch MP Geert Wilders. He is not, therefore, an advocate of complete freedom of speech within the House of Commons.

He understands – at least in Wilders’s case – that it is unwise for MPs or Peers to be sharing a platform with, and thereby boosting the status and profile of, people with truly hateful views. But what about a man who has perpetuated the anti-Semitic lie that 4,000 Jews did not turn up to work on September 11th 2001 because they had been warned off?

This appears to be yet another example – like Ken Livingstone’s friendship with the Muslim Brotherhood’s spiritual leader, Yusuf al-Qaradawi – of people on the left working uncritically with Islamist extremists.

Writing at the Telegraph, Michael Weiss has already called this:

“A proud day for Labour, Britain and her Government.”

How long can Labour MPs go on leaving their own party vulnerable to such sarcastic attacks?

15 Responses to “How much longer will Labour MPs cosy up to extremists?”