The coalition government’s considered approach to justice was welcomed by penal reformers, who considered it a once in a generation opportunity for change. 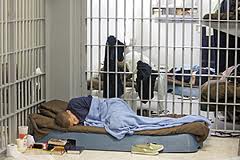 By Frances Crook, Director of The Howard League for Penal Reform

The coalition government’s considered approach to the challenges in the justice system was welcomed by penal reformers, who considered this a once in a generation opportunity to deliver real change.

Plans designed to reduce the prison population by 3,000 men, women and children and make better use of effective community sentences were a necessary change in direction. But unfortunately the government has gone into reverse, putting political goals ahead of effective jails.

The difference between cutting sentences by a third or a half for those who plead guilty early on is a technocratic issue that would have had little impact on prison numbers.

Rather than squabbling about a third or half of a sentence, we should admit that the real problem is in sending too many people  – and the wrong people – to prison in the first instance, and we should push for more courageous sentencing that would keep people out of jail altogether.

More than 60,000 people enter the prison system each year on a short term sentence (pdf). Sent to prison for not paying the council tax for example, or for flouting the smoking ban, people are given their release forms along with their induction papers.

Howard League research published yesterday (pdf) shows that people actually prefer a short spell in prison to a community sentence as lying idle in a cell is the real ‘soft option’.

Community sentences can take years to complete, and are managed by a probation service stretched to the seams by the weight of numbers – even more than our prisons are. It means that in too many cases people get little support and fail to turn up: breaches of their sentence that then lead to prison. Why not, many think, simply take the hit and go to prison straight away and get it over with?

Consequently, Britain’s prisons are overcrowded and dangerous places for both prisoners and for staff. Budget cuts without cuts in the number of prisoners will put everyone at greater risk.

This is still a precious opportunity for change, and the government’s green paper has been the subject of extensive consultation and debate. The government must stick to its guns and reform the system.