Ed Miliband will today commit Labour to tough action on those at the top and bottom who are not "showing responsibility" and "shirking their duty". 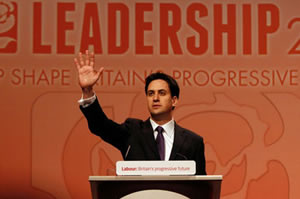 Ed Miliband will today commit Labour to tough action on those at the top and bottom who are not “showing responsibility” and “shirking their duty”.

In a speech this lunchtime, he will make clear his intention to change major planks of policy, on responsibility, high pay and welfare – committing Labour to acting to restore the link between high pay and what individuals are contributing to shareholders and the economy, through greater transparency and greater accountability.

“For too many people at the last election, we were seen as the party that represented these two types of people. Those at the top and the bottom who were not showing responsibility and were shirking their duty to each other.

“From bankers who caused the global financial crisis to some of those on benefits who were abusing the system because they could work – but didn’t. Labour, a party founded by hard working people for hard working people, was seen by some – however unfairly – as the party of those ripping off our society.

“New Labour did a lot to change the fabric of the country. But it didn’t do enough to change the ethic of Britain. My party must change… We were intensely relaxed about what happened at the top. No more. We will be a party that supports the real boardroom accountability that rewards wealth creation not failure.

“It is said we cared too little about responsibility at the bottom of society. No more. We will be a party that rewards contribution, not worklessness.”

On that point, on welfare and responsibility at the bottom, he will add:

“So we need responsibility at the top of society, but we also need it at the bottom. Again, the principle should be one that rewards contribution. We are facing a challenge to the belief in our welfare state – founded on principles of solidarity and compassion, but now tarred with the brush of unfairness and irresponsibility. If we want to protect and improve the British welfare state, we must reform it so it genuinely embodies responsibility and contribution as much as need.

“One area where people’s sense of fairness is under threat is social housing. In Manchester, as well as helping the most vulnerable families and disabled people with housing, they prioritise households who are giving something back to their communities – making a contribution – for example, people who work for or run local voluntary organisations and those who are working.

“They also look to reward people who have been good tenants in the past and who have paid their rent on time and never been involved in any Anti Social Behaviour. The London Borough of Newham is looking at something similar – prioritising work when allocating social housing and for example helping first those who give something back by, say, fostering children in need

“In their words they are ‘finding ways to end the race to the bottom where improving your situation and finding work are punished by getting pushed down the waiting list for a quality home’; these approaches mean that rather than looking solely at need, priority is also given to those who contribute – who give something back. It’s fairer and it also encourages the kind of responsible behaviour which makes our communities stronger, makes them work.

“They are just examples, but they show the kind of change we need. We are looking at all these issues in our policy review, but this is a simple way of rewarding people who do the right thing and it’s something I’d like to see done right across the country.”

We will have further analysis of Mr Miliband’s speech and his pledges on high pay later.