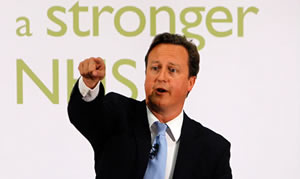 David Cameron, Andrew Lansley and Nick Clegg unveiled the long-awaited changes to the coalition’s health reforms bill, following the two-month “listening exercise” and the publication yesterday of the NHS Future Forum recommendations. However, a new poll has revealed deep unease amongst the public over the reforms – and the prime minister himself.

When asked the following questions, an ITV News/ComRes poll found:

• “The Conservative Party’s plans for the NHS are just a way to privatise parts of the health service” – 51% agree, 23% disagree;

• “The Government should scrap the current proposals for NHS reform and start from scratch” – 49% agree, 19% disagree.

“After a year of confusion and mishandling of the health service, this poll shows the public know they can’t trust David Cameron with the NHS. People see the prime minister breaking his promises and have rumbled his plans to open up all parts of the NHS to private companies.”

On the substance of the policy changes, meanwhile, Ed Miliband said:

“The best thing the government could do is go back to the drawing board because they are still going ahead with a bureaucratic reorganisation that’s going to waste billions of pounds – money that should have been spent on patient care at a time when the NHS doesn’t have huge amounts of money to spend and that means patients are going to lose out and we are already seeing waiting times rising.

“David Cameron said before the general election – he made a solemn promise – he said no more top-down reorganisations.

“That’s exactly what he rushed into, that’s exactly what he’s going ahead with, and we all know the consequences – billions of pounds that should be spent on patients instead being spent on making people redundant, some of whom may be rehired, and all the time it’s patients who are losing out in higher waiting times and worse service.”

“The reportt yesterday was a demolition job of the government’s mishandling and misjudgements on the NHS over last year – it may make a bad bill less bad but doesn’t do enough to remove large parts of legislation to turn the NHS into a market and not enough to stop the break up of NHS as a national service.

“They are opening up all parts of the NHS including commissioning to private companies… Ninety clauses are about setting up the NHS as a market – this looks like changing just one clause; my fear is that we will see the chaos, the waste and the cost continue into the future and waiting times will rise and services suffer.”

“The fundamentals of this are basic: the Tory belief that the private sector is better than the public sector… We believe in the NHS being the central provider… He [Cameron] wants a revolution in the way we think about services so giving people choice, contestability, competition – all things that you get in business life – that is not right way forward in NHS, it will let patents down and would break up the NHS…

“I fear Future Forum has done a good job but not gone far enough and will not see today far-reaching changes to health bill that are required to protect the NHS for the future and stop the possibility that we will see all parts opened up to the private sector – that is what Tories want to see.”

“The quality premiums for commissioning groups – strongly opposed by the BMA – are to stay in the health bill.”

“Monitor will be promoting choice, competition and collaboration – all of which are contradictory aims. And now European law has been thrown into this cocktail of confusion. At present, the private healthcare firms have a toehold of about five per cent of the NHS – but these companies and their slick lawyers will use EU law to gain a headlock on the NHS…

“Conservative ministers are anxious to allow the private sector to take over the NHS, despite their party’s long-running and deep antipathy to Brussels. Now they are prepared to give the green light to EU competition law to shape and carve up UK healthcare.

“It will be a fight to stop this domination by EU law before it assaults the unique character of our NHS. But once EU law is rampant, it will not be long before local care decisions are made in far-off boardrooms. The idea that your GP will be in charge is a fairy tale.

“The rich irony of this is that the right-wing Tories, supporting Health Secretary Andrew Lansley’s NHS privatisation, hate Brussels; while the pro-European Liberal Democrats will find the NHS privatised – and destroyed – by the very European ideal that they have devoted their political lives to.

“The battle to save a universal, joined-up NHS, where the patient, not profit, is the guiding principle is not lost and we urge MPs to redouble their scrutiny of the legislation, when the bill’s progress resumes through Parliament.”

Left Foot Forward will have more reaction and analysis on the health reforms later.

14 Responses to “Despite the policy changes, public still don’t trust Cameron on the NHS”